When you’re designing a projector screen or shopping for a projector, inevitably you will come across numbers like 16:9, 4:3, or 21:9. These are aspect ratios.

What is aspect ratio?

If that all seems confusing, don’t worry, because luckily in the projection world there are only a few aspect ratios that you need to consider. Outside of some specialized equipment, you’re going to find that your projector and whatever source you have for your video are going to meet one of these:

If you’re old enough to have used the old style CRT televisions, you’ll know the 4:3 aspect ratio well. This was the standard for most video as it is the aspect ratio of the earliest 35mm films and went on to be adapted for home television broadcasts to match these in the 1940’s and 1950’s. Later, computer monitors and just about everything else continued to use the format because it fit most content. While rather outdated today, this format still exists in some lower-end projectors or those marketed toward office use.

As home television became more popular in the mid-20th century, to keep people coming to the theater the film industry increasingly used wider formats to provide a different experience than could be had at home. This presented a problem when it became popular to view these new wide movies at home on a 4:3 screen. How can you fit that wide picture of a film like Ben-Hur or Star Wars onto a relatively narrow home television?

To fit that wide image onto a home TV you have to sacrifice something. You can cut the sides off the picture, removing sometimes important content from the image.

Or if you want to preserve the entire picture, you could include black bars on the top and bottom of the picture to make it fit (wasting lots of space on what was usually an already small screen).

It wasn’t an easy choice for the editors that had to figure out how to adapt a film to home video, and that’s why so many films used to start with the disclaimer, “This film has been modified from its original version. It has been formatted to fit this screen.”

The folks who invented high definition displays attempted to solve this by creating a new “standard” shape for televisions: 16:9. This format, while not as wide as the cinema, would require less “trimming” of the picture and/or would waste less of the screen when presented at original size.

The other group of commonly-used aspect ratios you will likely encounter are all very close to each other, but for the sake of this article will be treated the same. These are wider aspect ratios that are used in cinemas for feature films. These first gained popularity in the 1950’s when Twentieth Century-Fox created “CinemaScope,” a term that generally means either 2.35:1, 2.39:1, or 2.40:1. Recently, “ultrawide” computer monitors and televisions with an aspect ratio of 21:9 have become popular, partly because, at 2.33:1, they are much closer to the wide “CinemaScope” format than the 16:9 shape mentioned above.

How do I choose the aspect ratio for my projector screen?

All of this is important to understand because when you’re selecting or building a projector screen for a home theater, outdoor screen, or for a golf simulator screen, you want to make sure that your projected image is going to actually fill your screen. After all, there’s no sense in building a screen that’s a little wider or taller than your image will ever be, so you’ll want to select an aspect ratio that is most appropriate for you and build your screen to match.

You might be thinking that, since 2.39:1 is most common in a theater, that’s what you’ll want for your home theater. That’s understandable, but unless you want to spend a lot of money on some relatively special equipment, it’s probably not what you want. Consider first that there are basically no projectors that natively create these 21:9 or 2.39:1 images. Yes, there are some out there that have special lenses to accomplish it but these are very expensive and really are beyond the scope of this article. By far the most common home theater projectors are built to a 16:9 aspect ratio, and this presents a problem on a 21:9 screen.

Let’s say you build a 21:9 screen — one that measures 54″ x 126″, but since you want to keep your costs somewhere in this universe, you get a nice home theater projector that’s capable of 4k resolution — a 16:9 aspect ratio. The first thing you’ll see when you fire up your new projector is that default blue screen that it might display while waiting for a signal. This blue screen is actually really handy for getting your projected image lined up on your screen so you start to fiddle with the zoom and focus and you work it out so that the height of the image fits just right in the height of the screen. That’s when you see your first problem: the 16:9 4k image only measures 96″ wide when it’s 54″ tall (54*16/9=96). That leaves 15″ of empty screen on either side of the projected image.

That’s frustrating, but you have an idea. You put in the disc for your favorite movie and see that the image includes black bars on the top and bottom leaving the actual image the same shape as your screen. You can zoom out on your projector and fill up the whole screen! So you do and you enjoy the movie and who cares about those black bars projecting off the top and bottom of your screen if there’s no content on them anyway. So then you switch the input over to your digital cable box to watch TV and you see your second problem.

When you zoomed out to fill that full 126″ wide screen, your “native” display grew all the way to about 71″ tall (126*9/16=70.9), so now you have over 8″ of image projected off the screen on the top and bottom both. Your HD cable or satellite box is now sending a standard 16:9 signal to your projector, and so to get it all back on the screen you zoom back in and are back where you started with not using the full width of your screen.

Sure, you can set up an automated system of masking curtains to open or close to cover up the unused portion of your screen (and this is how most real cinemas handle the various aspect ratios of various movie producers), or you could select a projector that has an automated zoom function with a memory to remember various settings for different aspect ratios, but is that really worth the hassle? We don’t think so. Most content out there currently is designed to be shown on a 16:9 television and so you’re probably going to have a limited use for that ultra-wide projector screen.

Similarly, if you buy that lower-priced 4:3 projector, you’re either going to constantly have to trim content off the sides of your picture or rarely use the top and bottom portions of the projector’s image. 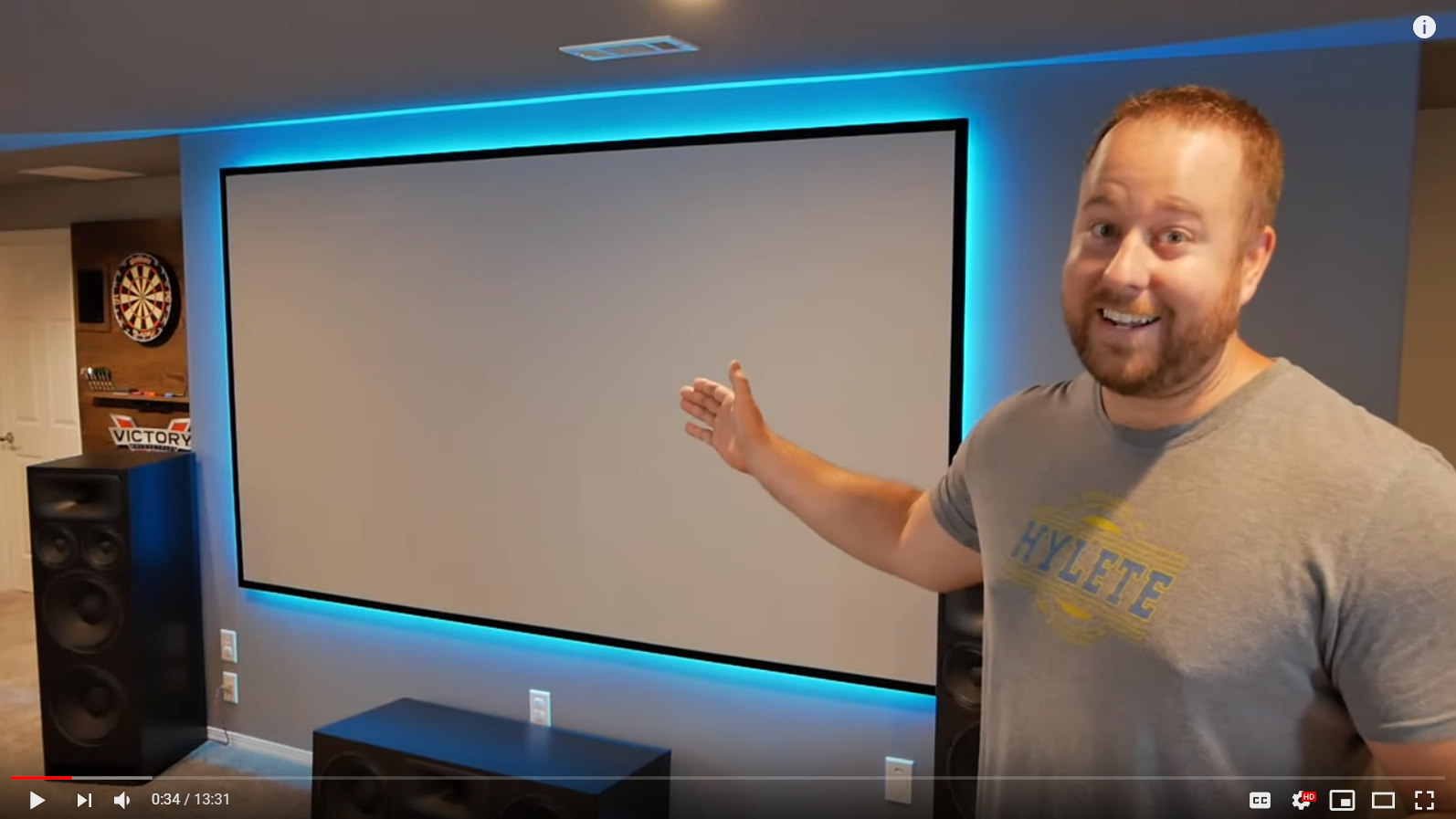 Building a DIY projector screen at home is inexpensive and surprisingly easy. Check out this... 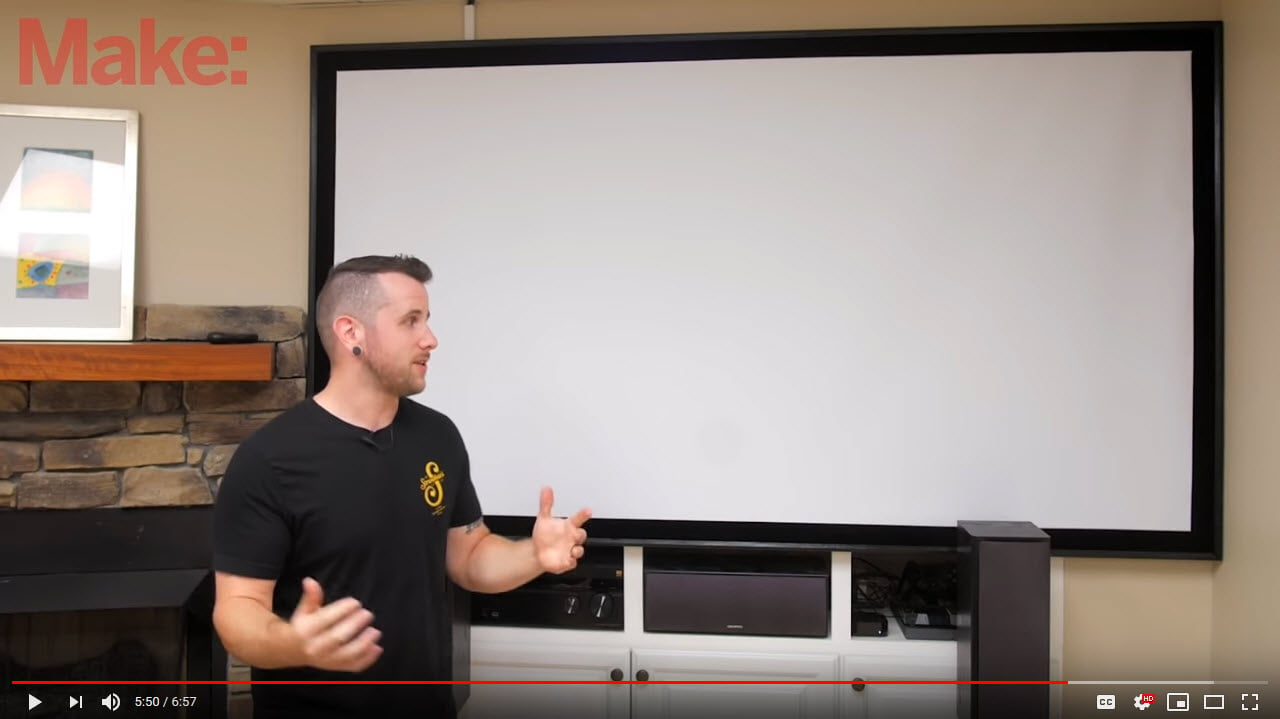 VIDEO: Make – How To Build A DIY Projector Screen

You don’t need to spend a fortune on a projector screen! With some inexpensive screen material and... 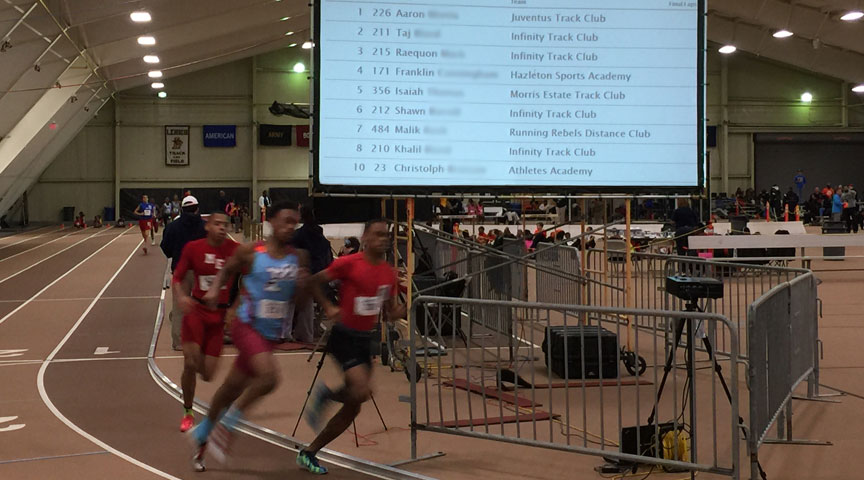 I'm using a projector with 4500 lumens. Here is my FlexiGray Projector Screen in a high-lighting...