Indoor golf is not new. Many different versions of it have been around for years and the technology is constantly improving.

But one couple noticed that a combination of indoor golf and a fun, social environment with good food and drinks was lacking. Check out what they shared with the Carl’s Place team below and on camera here.

“We wanted to do something different in the sense that if you had no inclination to golf, had no golfing background or knew nothing about golf, you might come here and treat it like you would a dartboard or pool table in a traditional bar or restaurant setting,” said Brent Mann, who recently opened Blind Shot Social Club with his wife in Madison, Wis. “A lot of golf facilities don’t really cater to the non-golfer.

“If you golf, you get it, you understand it. But if you don’t golf or are intimidated by it, we wanted to have an environment where you enjoy being in the space, the food is good, the cocktails are good … but there is also golf.”

Blind Shot offers a delicious food and cocktail menu, including many non-alcoholic beverages, but also has four public golf simulator bays, an undulated putting green and a private golf simulator room that can be rented out for corporate functions, birthday parties and much more.

Mann, who has been teaching golf for 20 years, said they wanted to create a business that combined both his experience in golf and his wife’s experience in the restaurant and bar industry. Mann operated an indoor golf facility in Santa Monica, Calif., and his own teaching studio in Beverly Hills for several years before moving back to his home state of Wisconsin.

“If you’re a competitive golfer, we have TrackMan simulators and excellent surroundings. The mats we hit off of are super thick and padded and we use premium golf balls. For a golfer, it’s top notch,” Mann said. “But then also for someone who doesn’t know about any of that stuff and has no frame of reference, we want it to be accessible for them, too.”

In California, Mann ordered a screen off Amazon when he first built his place in Beverly Hills. After a week, he ended up ordering golf impact screens from Carl’s Place.

Mann added that the combination of durability, image quality and acoustics is what sold him on his first Carl’s Place screen purchase.

When (people) are researching, that’s stuff they don’t think about. I didn’t my first time,” Mann said. “It’s kind of trial and error. It’s nice to have a place you can order from when they’re already experienced in the trial and error department.

Mann then helped build another golf simulator near San Diego for a client and ordered another Carl’s Place screen. When he moved back to Wisconsin and was planning to open Blind Shot, he ordered five Carl’s Place Preferred Golf Impact Screens to outfit his vibin’ restaurant and indoor golf facility.

“Everyone in all the forums said the same thing, that (Carl’s Place) is the place to go,” Mann said. “I didn’t even realize they were in Wisconsin. I was like, ‘Yeah, that’s perfect.’ It’s kind of serendipitous that the best place I found was also minutes down the road.

Mann said his experience with the Carl’s Place Customer Service Team was helpful.

“It was nice because even though I’ve done this before and been in the golf business forever, it doesn’t make me an expert in golf impact screens,” Mann said. “It’s nice to actually talk to someone who has experience in the business. A couple things were confirming what I was thinking, and a couple things were letting me know some stuff that I didn’t even know to ask about, which was nice.

“It’s a real company, real people, and something that is designed for (a golf simulator), not just a white screen that you can also hit golf balls into.”

Mann said they chose the Preferred screen to get the best image quality for the price, keeping in mind that it’s just him and his wife starting up the business.

It’s budget effective, but also they look sharp as hell. We’ve had good feedback from people,” Mann said. “Sometimes the fear is you get amazing software and great projectors, all this stuff, but it doesn’t matter if it doesn’t parlay to the image on the screen. We could buy $20,000 projectors, but if it doesn’t show up on the screen, it’s pointless.

The installation process for the screen was easy, Mann added. “Any wrinkles were non-existent like two hours out of the box,” Mann said. “We went with the finished edge with grommets. We matched it up with the dimensions that we had and got the bungees, and it was pretty cut and paste.”

Mann had no problem recommending his experience with Carl’s Place, from the order process to the actual product.

“Even if your buddy is a golfer, he’s not going to be the best source. Talking to your local pro, unless they’ve installed simulators, is not going to be the best source. Forums online seem like they have good information, but they’re not experts,” Mann said. “For a lot of people, these are big purchases, so to actually talk to someone and kind of quell any of those doubts, fears or apprehensions you might have, I wouldn’t hesitate to suggest people to do it again.”

What sets Blind Shot apart from competitors? Mann said it’s his experience in golf and his wife’s experience in operating successful restaurants and putting together thoughtful food and cocktail menus.

“We wanted to combine those two things with both of our experiences, but then at the end of the day, have it in a facility that people walk in and they get a vibe from right away,” Mann said. “People get in a rhythm. They go to their same restaurants, which I do too, or they stay home and watch Netflix and order Eat Street. It’s kind of nice to have something like this to go to for something different.

“It’s not just one of those winter things either. If you’re out golfing 18 holes, it’s going to cost you more than it used to and take up four or five hours minimum. This way you can still golf and get a lot of shots in. Technically the beverage cart is right here constantly, so it’s kind of nice to have that aspect of it. A lot of people’s expectations of what an indoor golf facility is either outdated or incorrect, so we just want people to come check it out and see what it could be.”

Thinking of starting up a golf simulator business? Read about two other business owners and their decision making process. And if you’re ready to dive in head first but want some help with the design process, check out the Carl’s Place Custom Design Service. 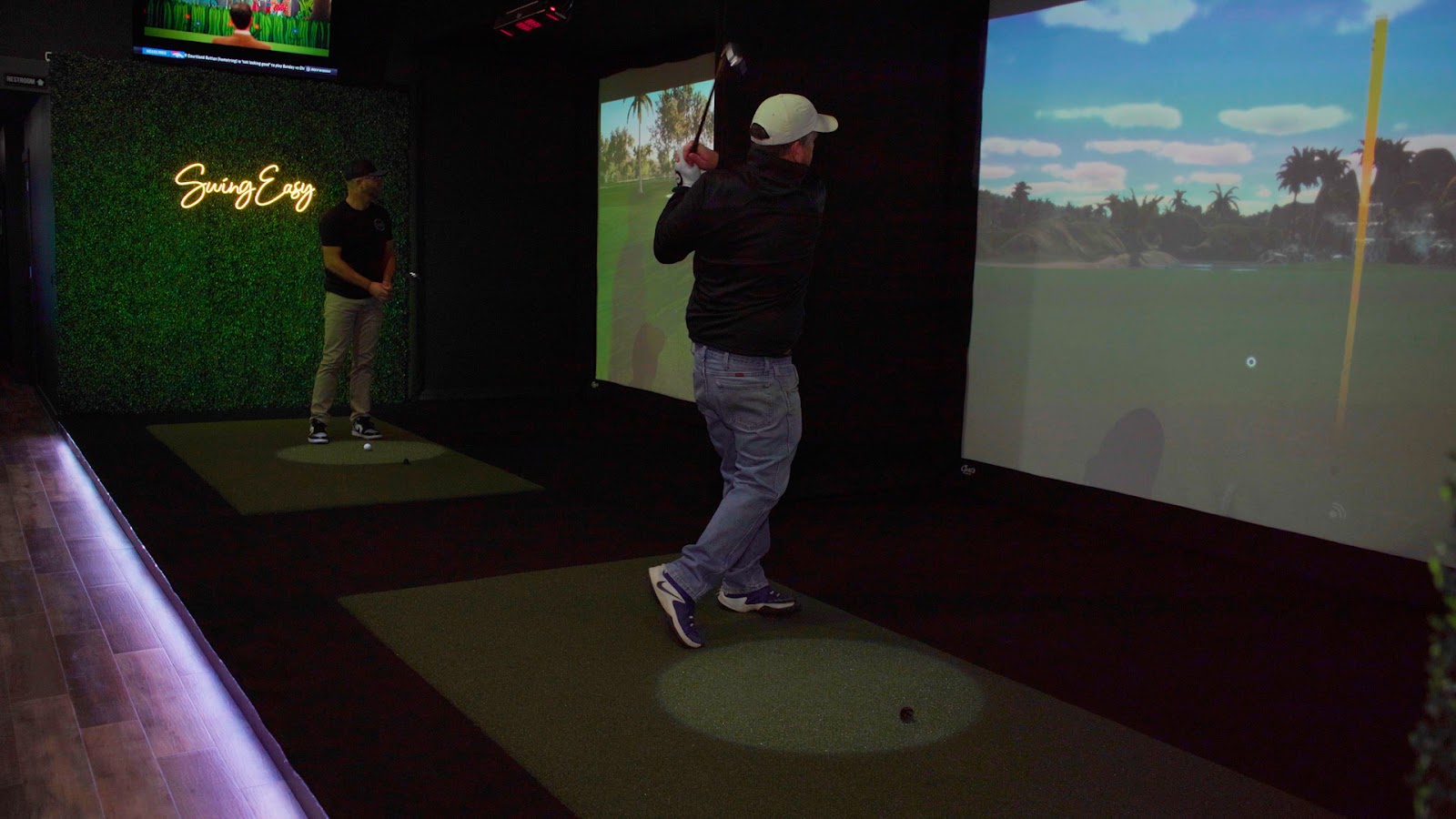 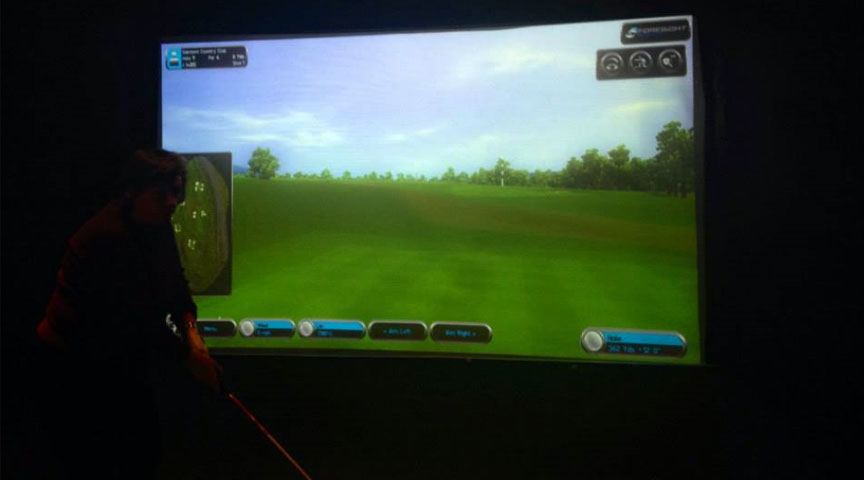 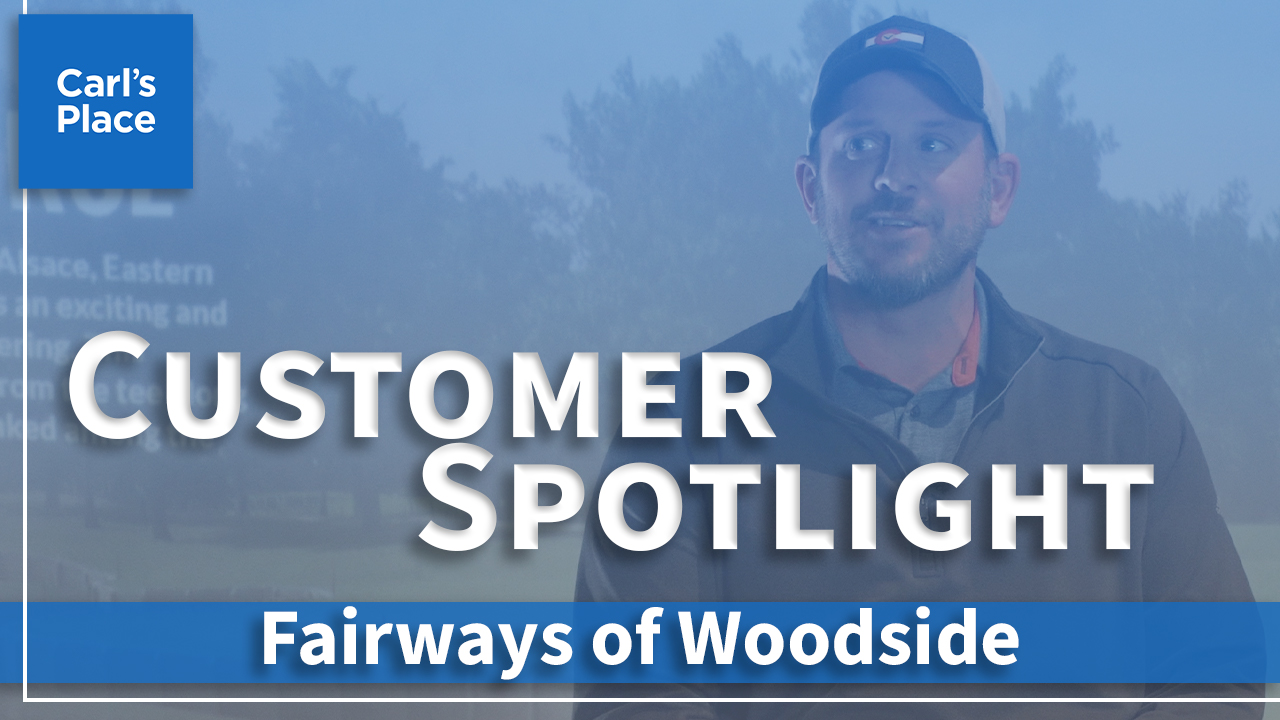 Ben, Chris, and Ryan from Fairways of Woodside discuss their experience with Carl’s Place Golf...