It’s been about a year since Carl’s Place customer DJ added a golf simulator to his Arizona home. Check in to see how his golf enclosure and impact screen are holding up.

It’s been about a year since Carl’s Place customer DJ made a great life choice. 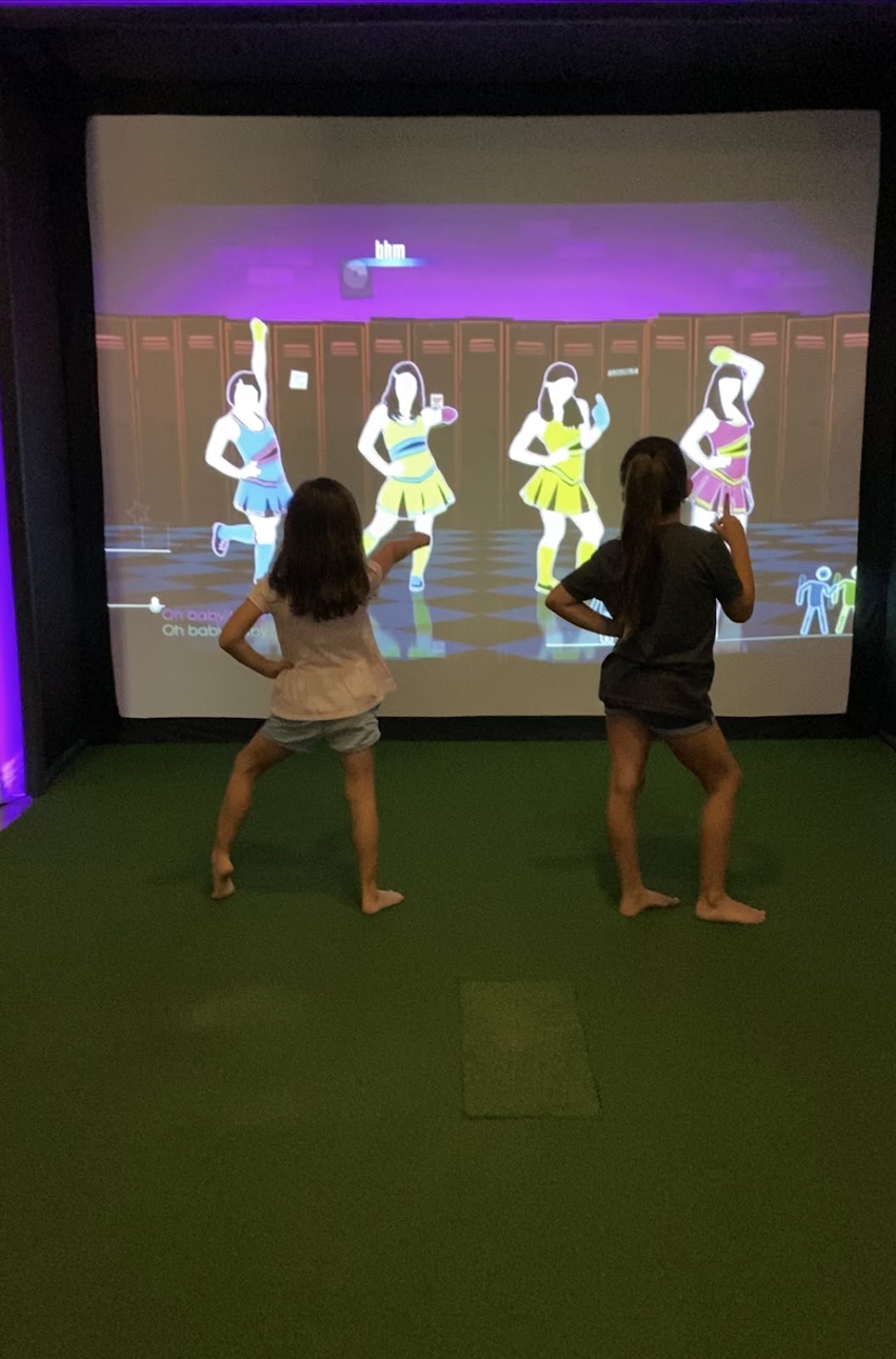 About this time last year, he decided to install a home golf simulator in an extra, unused room in his house. And he hasn’t looked back.

“We use that room a lot more than we did before when it was a billiard room,” DJ said. “... (A golf simulator room) is something that more households should have. Some people just have sitting rooms in their house that I’ve never sat in with them and I’ve never seen them used. It’s kind of like, ‘Why waste that space when you could turn it into something that is truly fun for everybody?’”

How does DJ know it’s fun for everybody? Well, he says his wife and two daughters - ages 7 and 11 - are enjoying using the space for non-golf purposes. And sometimes, they even have fun hitting golf balls.

“We’ve used it for plenty of movie nights,” DJ said. “We used it to watch The Masters, basketball games, football games. I find myself in there quite a bit. I may be using it three or four times a week for golf, but closer to five or even daily with my kids.”

So what has DJ changed or upgraded in his golf simulator in the last year or so? Among other aspects, he has:

However, there are a couple pieces that haven’t changed a whole lot in the past year, except for maybe a few DIY customizations. According to DJ in his YouTube video, the Carl’s Place DIY Enclosure and Premium Impact Screen have been the “stars of the show.”

One key to helping the impact screen hold up strong through frequent usage is keeping it clean.

“(They’ve) held up really well,” DJ said. “You definitely want to make sure people are using quality balls … Make sure (your friends) clean their clubs and aren’t just smashing mud onto the ball and onto the screen … I clean my balls and clubs after every (outdoor) round.”

DJ added that using balls with a urethane cover will also help keep balls from launching higher with more spin off wedges, which can cause burn marks. Although there are a few burn marks on his screen, DJ said he has to really get close to see them, and they are not visible with the projector on.

When it comes to his physical golf game, DJ said there’s no doubt that it has helped him become a better player. 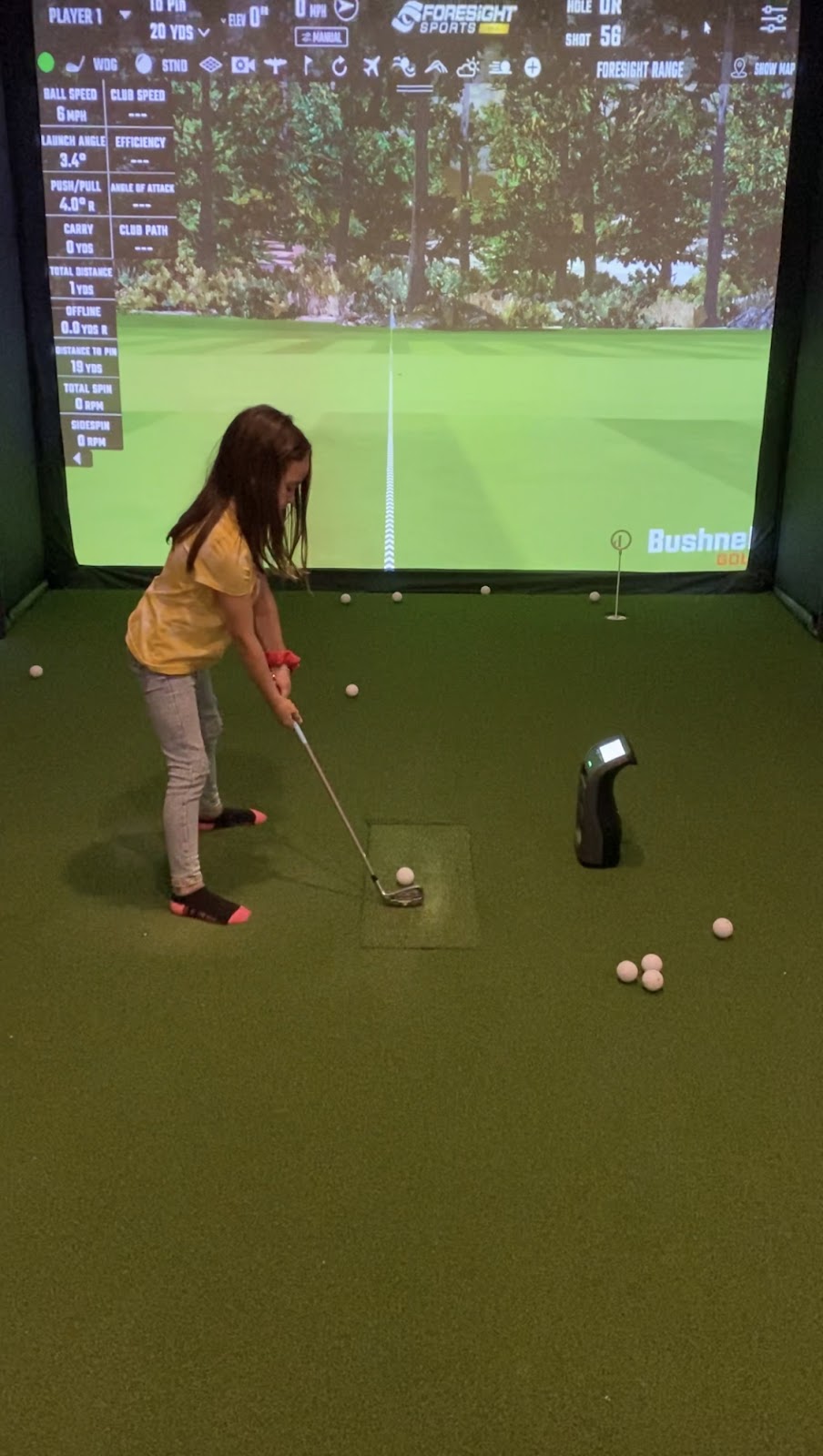 “My ability to shape the ball has improved drastically,” DJ said. “I also get to practice shots I typically can’t on the range, like putting myself behind a tree and learning how to hit low and under, or get the ball to curve around it.

“I also used to have one shot type for a certain yardage. Now, with sim practice, I have learned to use different clubs and shot types for the same distance.”

DJ added that he’s been taking advantage of recording his swing and sending it in via the TaylorMade+ Coach app to get instruction from a high level golf coach. The service costs $25 per month.

“The cost savings in lessons alone will pay for this sim over time,” DJ Said. “I pick what I want to improve on and just using my sim and iPhone, I send videos to the coach and he sends back drills and videos on what to practice.”

CARL’S TIP: Carl’s Place Swing Cameras are useful tools when wanting to record your swing for your own use, or to send in to a golf instructor.

A year older and wiser in the golf simulator world, DJ had some advice he would pass along to those who are looking to get their first golf simulator.

Have you had a golf simulator for multiple years? How is your setup holding up? What changes have you made and what does the future hold? Let us know in the comments! 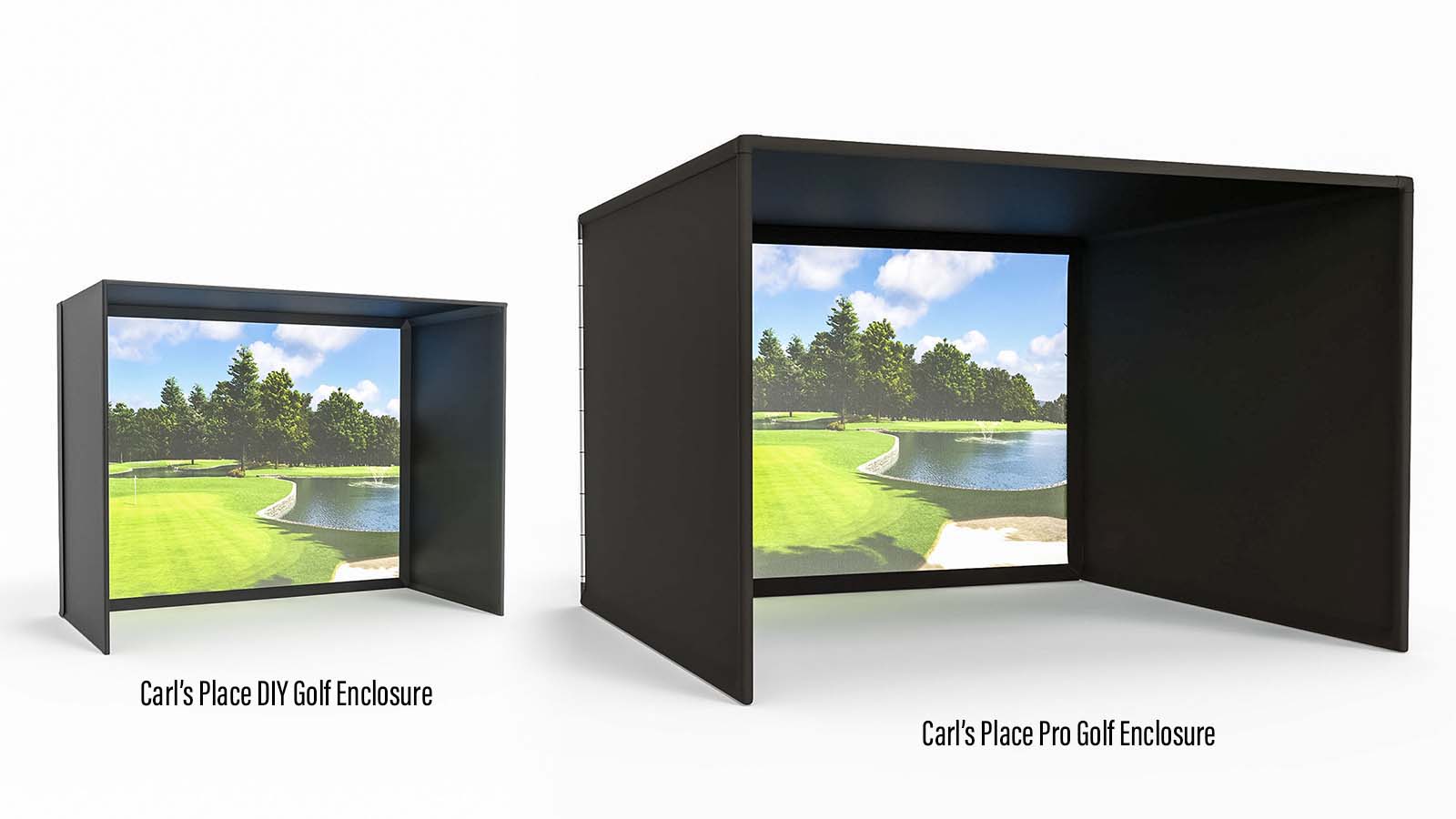 DIY vs. Pro: Which golf enclosure is best for your space?

Carl’s Place offers two types of golf simulator enclosures: the DIY and the Pro. Some might think... 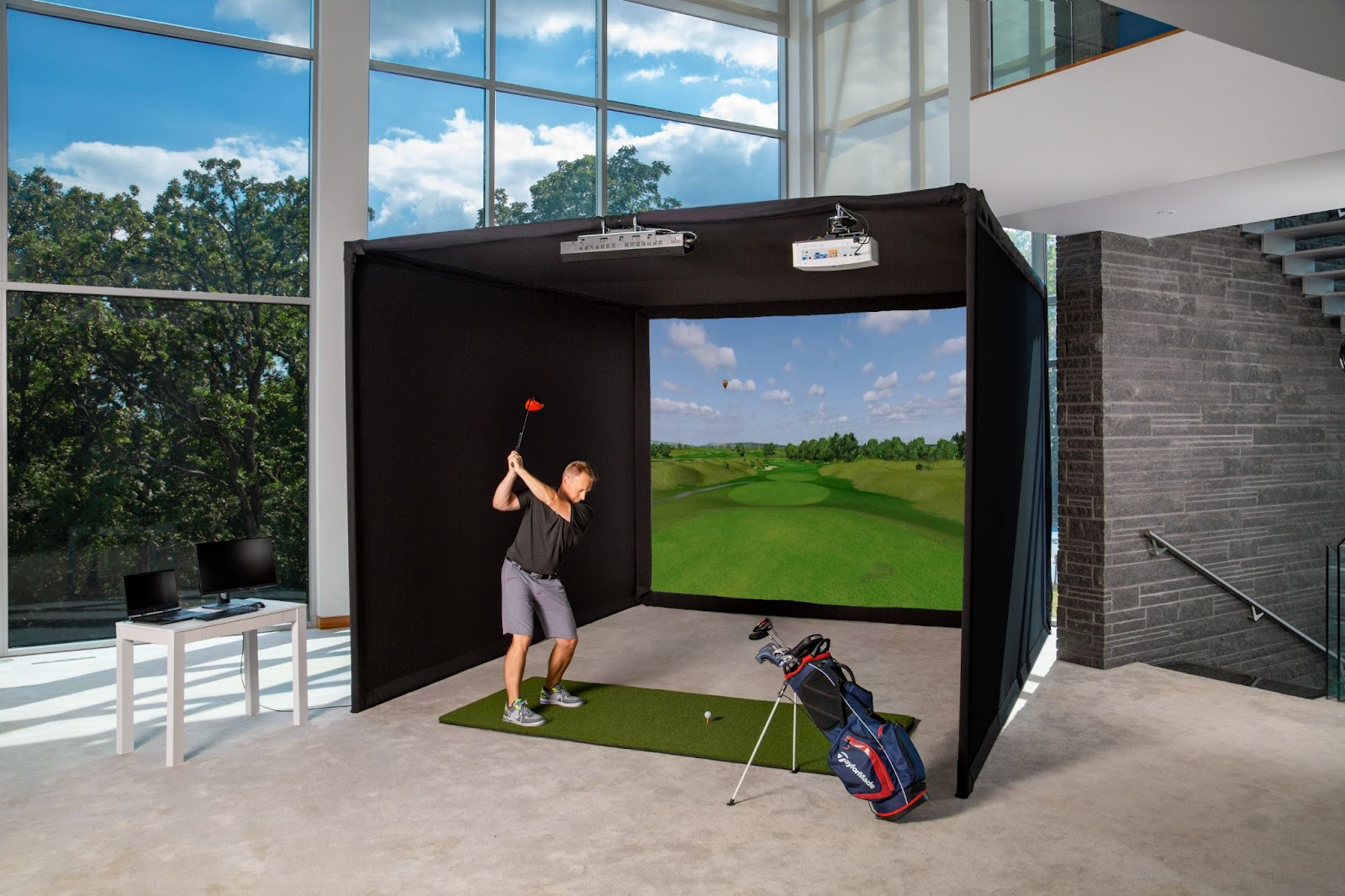 In a golf simulator, protecting walls and ceilings from a shanked golf ball is concerning for... 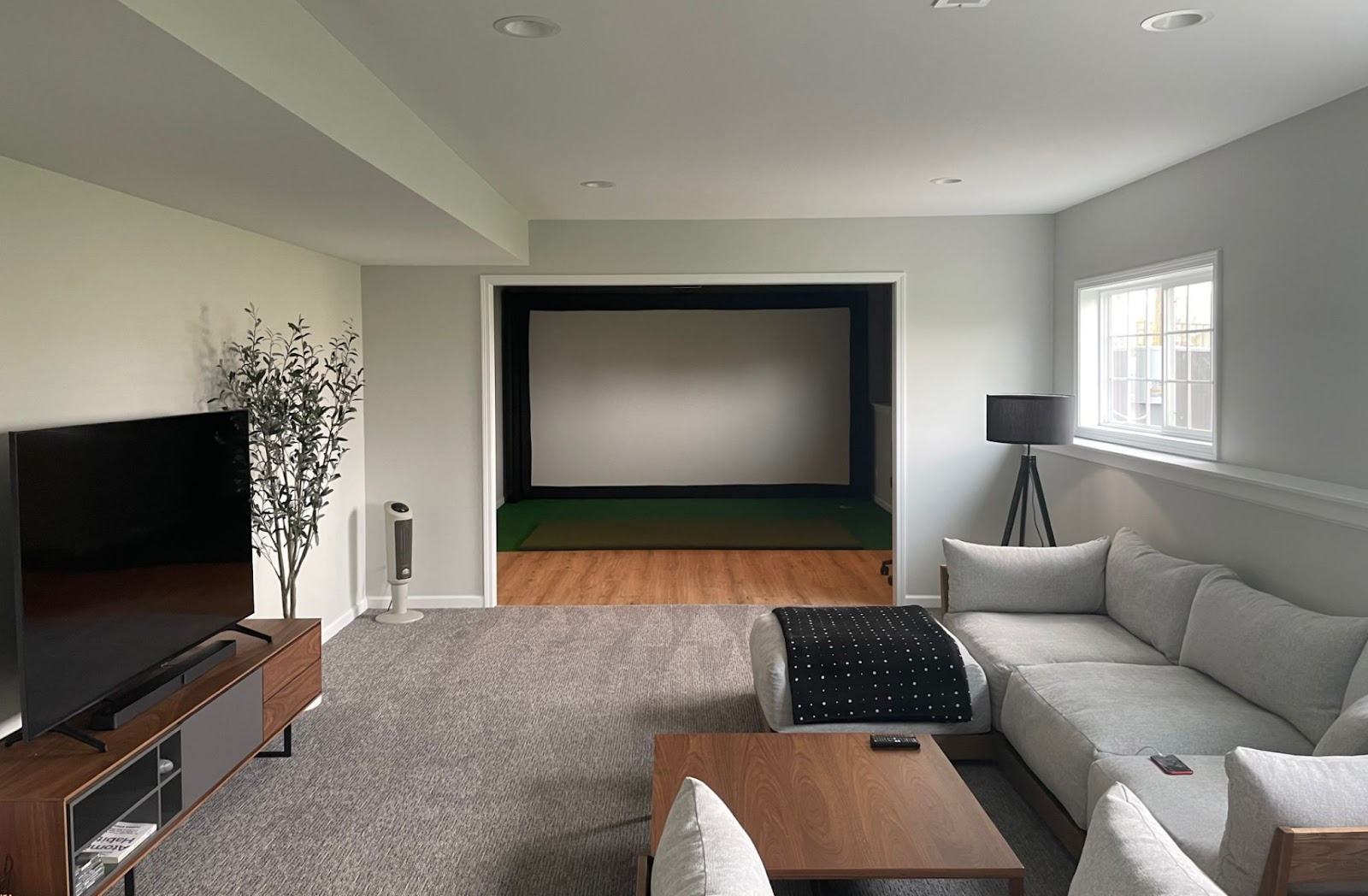 Adding a golf simulator to a basement with 9-foot ceilings is possible with Carl's Place. See how...