Purchasing a projector for your golf simulator setup is one small, but important piece of the pie. While shopping for a projector, you might run into several terms you do know, such as resolution, but others that you’re unfamiliar with, such as throw distance. Hint: it’s not how far you can throw your projector without breaking it.

Below, we help explain what some of these terms mean and how they will affect your golf simulator usage. These terms will help you with purchasing your projector and setting it up in your space.

You will almost certainly come across the term “lumens” when searching for projectors. In basic terms, lumen means how bright that projector’s image will be.

The farther away the projector is from the screen or the more ambient light you are dealing with, the higher lumen number you will want.

No, those ratio numbers (4:3, 16:9) are not how many strokes and putts we are predicting you to have on your first golf simulator hole.

Aspect ratio refers to the shape of the image being projected. When the aspect ratio of the projector, image and screen match, the image fills the entire golf projector screen and you will not see black masking bars.

LAMP VS. LED VS. LASER PROJECTOR

Most projectors either use a lamp, LED lights or lasers to shine the light on the screen.

The lamp is the tried and true way that has been around since the invention of the wheel. OK, maybe not that long, but it’s definitely the tried and true technology. Some new innovations, such as brighter light and increased lifespan, are being added. However, if you need a higher lumen output, your maintenance needs will increase as well.

LEDs are great for installing projectors in hard-to-reach places as they require low maintenance. They will not go through a lamp as quickly, which makes them great for golf simulator setups that will be used every day.

Laser is one of the fastest growing technologies in the projector industry. It is similar to LED with the high lamp life and low maintenance, and it also generates lower heat. What separates it from the other two is the higher lumen output, which is great for a larger setup.

Liquid Crystal Display (LCD) has three separate glass panels – one for red, blue and green. Kind of similar to stained glass in a church, but not really.

As light passes through the LCD panels, individual pixels can be opened to allow light to pass or closed to block the light, as if each little pixel were fitted with a Venetian blind.

This activity modulates the light and produces the image that is projected onto the screen, which helps with color saturation and provides a somewhat sharper image.

The Digital Light Processing (DLP) chip – no, it’s not edible – is a reflective surface made up of thousands of tiny mirrors with each mirror representing a single pixel.

Light from the projector’s lamp is directed onto the surface of the DLP chip and the mirrors wobble back and forth, directing light either into the lens path to turn the pixel on, or away from the lens path to turn it off. DLP is known for its smoother video, showing less pixels and having higher contrast for “blacker” blacks.

When it comes to projector resolution for your golf simulator, there are two key terms to know: native and maximum. Native resolution is the actual, true and physical resolution of the projector. The projector will never be able to display more actual pixels than it has on those panels or chips.

The throw distance is the amount of space between the projector lens and screen surface.

A projector with a zoom lens comes with two different throw ratios: one for the minimum zoom setting and one for the maximum.

The lower the input lag, the better for your golf simulator.

Input lag refers to the time between when the audio/video signal from the input source (computer, tablet or other device) is received by the projector and when the projector actually projects the video that corresponds to that signal.

If you take the brightest white on a screen and the darkest black and compare the luminosity, you will get the contrast ratio. A projector might have a great lumens rating, but if the contrast ratio is low, your image will look washed out.

If you’ve got a weird obsession with trapezoids, then you might not need to worry about this.

Do you plan to have your projector not directly perpendicular to your golf simulator screen? If so, you will want to make sure your chosen projector has flexible keystone correction settings.

Keystone correction allows you to skew the projected image to make it rectangular to fill your screen as much as possible.

Overwhelmed with the terminology? We get it. This article on choosing a golf simulator projector helps walk through more of our recommendations. Or, you can always contact the Carl’s Place Customer Service Team at 608-352-0002. 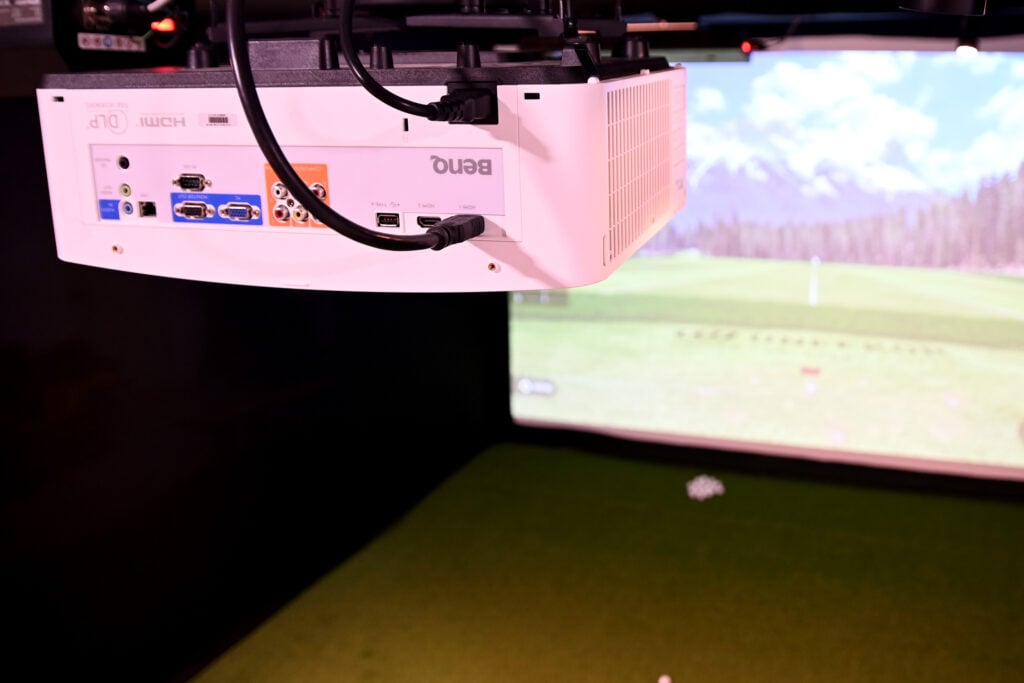 Deciding which projector to buy for your golf simulator setup can be pretty difficult, let alone...