Which Optoma projector is best for your golf simulator? Let's compare the color, brightness, cost and more of the GT1080HDR vs. GT1090HDR vs. ZH406ST projectors! 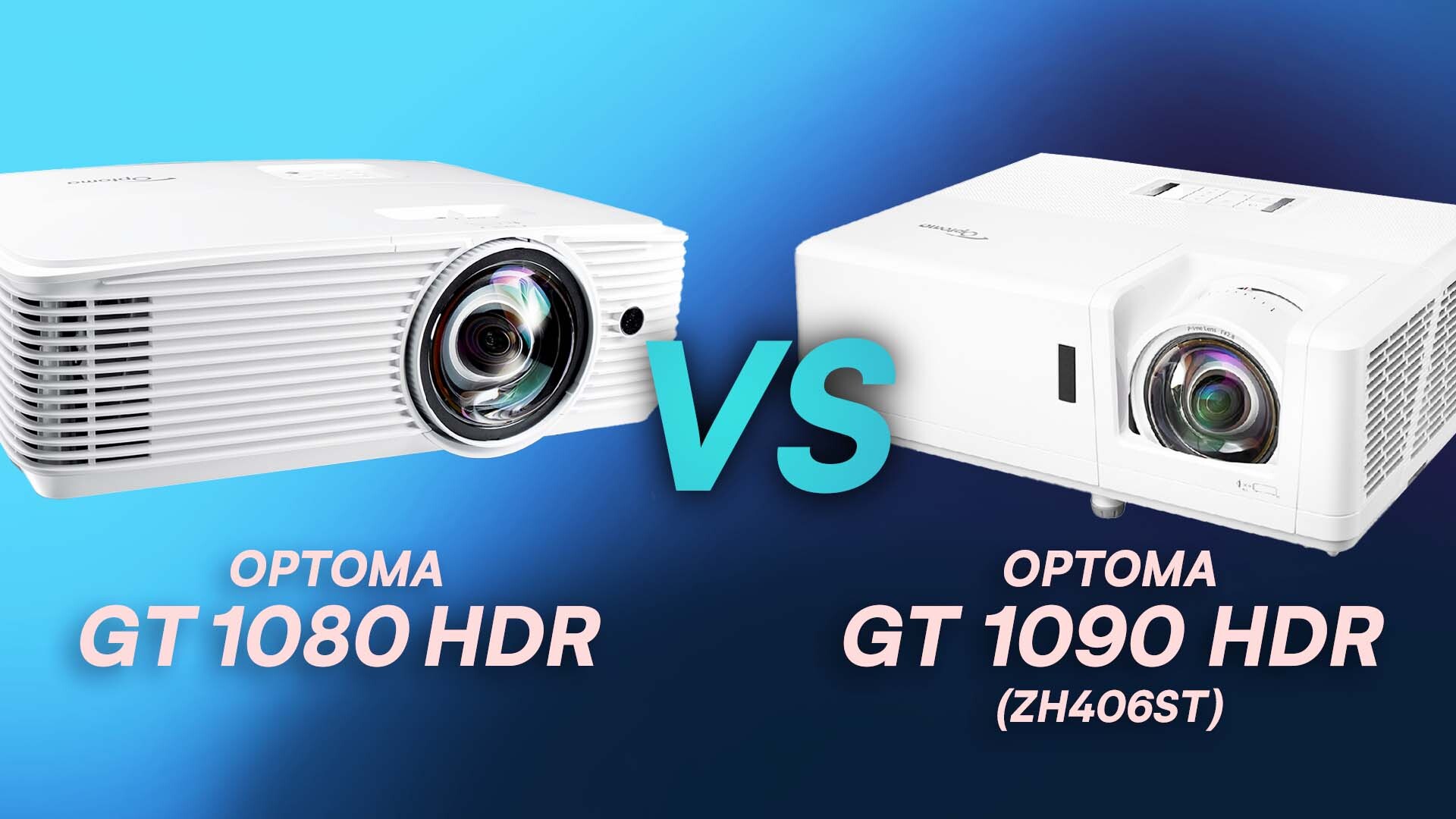 Two of the top Optoma golf simulator projectors are similar in name, but the price … not so much.

We compared colors, brightness, throw distance and many other factors to consider when selecting one of these projectors for your golf simulator setup.

First, let’s go through the main specs of the Optoma GT1090HDR and the ZH406ST and highlight any differences.

Just a couple of things to note: there are not many differences at all, and where there are differences, it’s very minimal. Most of the main specs are exactly the same;  Heck, even the dimensions are exact down to the hundredth of an inch!

They are about as close to being the same projector as Carl is to his next Mario Kart race. So from now on, when we speak about the ZH406ST, just imagine it being the GT1090HDR.

Tag team! The Optoma GT1090HDR needed a break and will take a seat on the bench while the ZH406ST gets tagged in. It’s fair because of, like, the transitive property, or something, right?

Let’s compare the specs between the Optoma GT1080HDR and ZH406ST, and highlight the differences again.

As you can see, the ZH406ST and the GT1080HDR have several significant differences, which led to us a test between the two in a real life golf simulator environment. We figured there would be plenty of differences based on the price points.

We use the default settings to compare the Optoma projectors side by side. Watch the results of our test below!

We found that some of the key spec differences - lumens, contrast ratio, horizontal keystone correction, light source and dimensions - made a huge difference in the end.

Keep in mind: just because one projector performs better than the other in a certain spec doesn’t mean that the projector is better in all real world situations.

How many lumens do you need for a golf simulator? Well, it depends on your setup.

It was very obvious that the Optoma ZH406ST had significantly more lumens; its picture was much brighter, which means it would work much better in a setup with more ambient light, such as windows in the daytime.

That said, the Optoma GT1080HDR was still very bright and would work great in this aspect with limited ambient light.

If you’re in a completely dark or light controlled environment, the GT1080HDR would be just fine.

According to the specs, the ZH406ST’s contrast ratio was 6x more than the GT1080HDR. It certainly showed.

You could see the difference in colors on the RGB spectrum, as well as in the shades of black/gray. Check out the video for more of a visual representation.

This is a pretty significant difference. If you need the flexibility to offset your projector placement from the center of the screen, you will have to go with the ZH406. The GT1080HDR does not have horizontal keystone to correct the trapezoidal image created when off center.

In smaller setups with short throw projectors, sometimes moving the projector off center will help get the projector out of the way of you swinging your club or the ball flying off your club. You would of course want to protect your projector with some form of case, such as Carl’s Floor Mounted Projector Enclosure.

The ZH406ST also comes with a setting where you can manually adjust each corner of your image to fit your impact screen perfectly.

The light source could arguably be the biggest difference between the two. The ZH406 has a laser light source, while the GT1080 has a lamp. Laser generally gives off better picture quality, and is why the ZH406 has better contrast ratio, light source life and brightness.

Keep in mind that laser projectors do not jive well with slow motion swing cameras. If the cameras are capturing super slow motion video of your golf swing, it will also capture the laser projector colors going across the screen. It’s an effect we cannot see with the naked eye, but when slowed down, can be a bit jarring.

Although both projectors fit inside of a Carl’s Floor Mounted Projector Enclosure or on our mounts, the GT1080HDR’s compact build is the winner here. Easier to move around, easier to fit in tight spaces, easier to mount. Smaller footprints are almost always better!

The Optoma ZH406ST provides a significantly better picture, and the option to move your projector away from the center is crucial. If money is not a factor, but a high quality, bright image is, we would suggest going for the ZH406ST.

Optoma GT1080HDR review: It’s a heck of an entry level golf simulator projector for the price. If you get the GT1080HDR without seeing other projector options, or comparing them side by side like we did, you will be very happy with your purchase. It does the trick for less than half the price. Feel free to use that money savings elsewhere!

The good news: you’re not going to be disappointed if you purchase one of these projectors. They are both user-friendly and versatile and will provide a great, high-definition image.

This post may contain affiliate links. If you click through and make a purchase, Carl’s Place may receive a small commission at no additional cost to you.

Choosing a Projector for a Golf Simulator 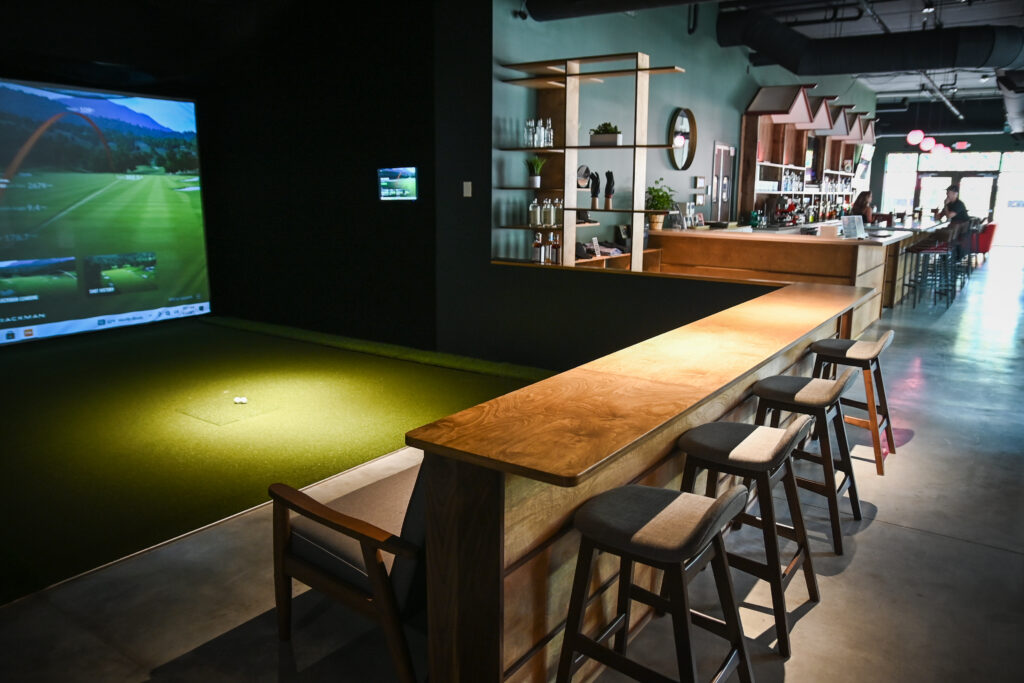 Next level your bar or restaurant business with a golf simulator

Looking for an affordable projector for your golf simulator? Our BenQ LW500ST review shows a budget...