The keys to placing a projector include making sure it will fill your screen, but also keeping it out of danger. 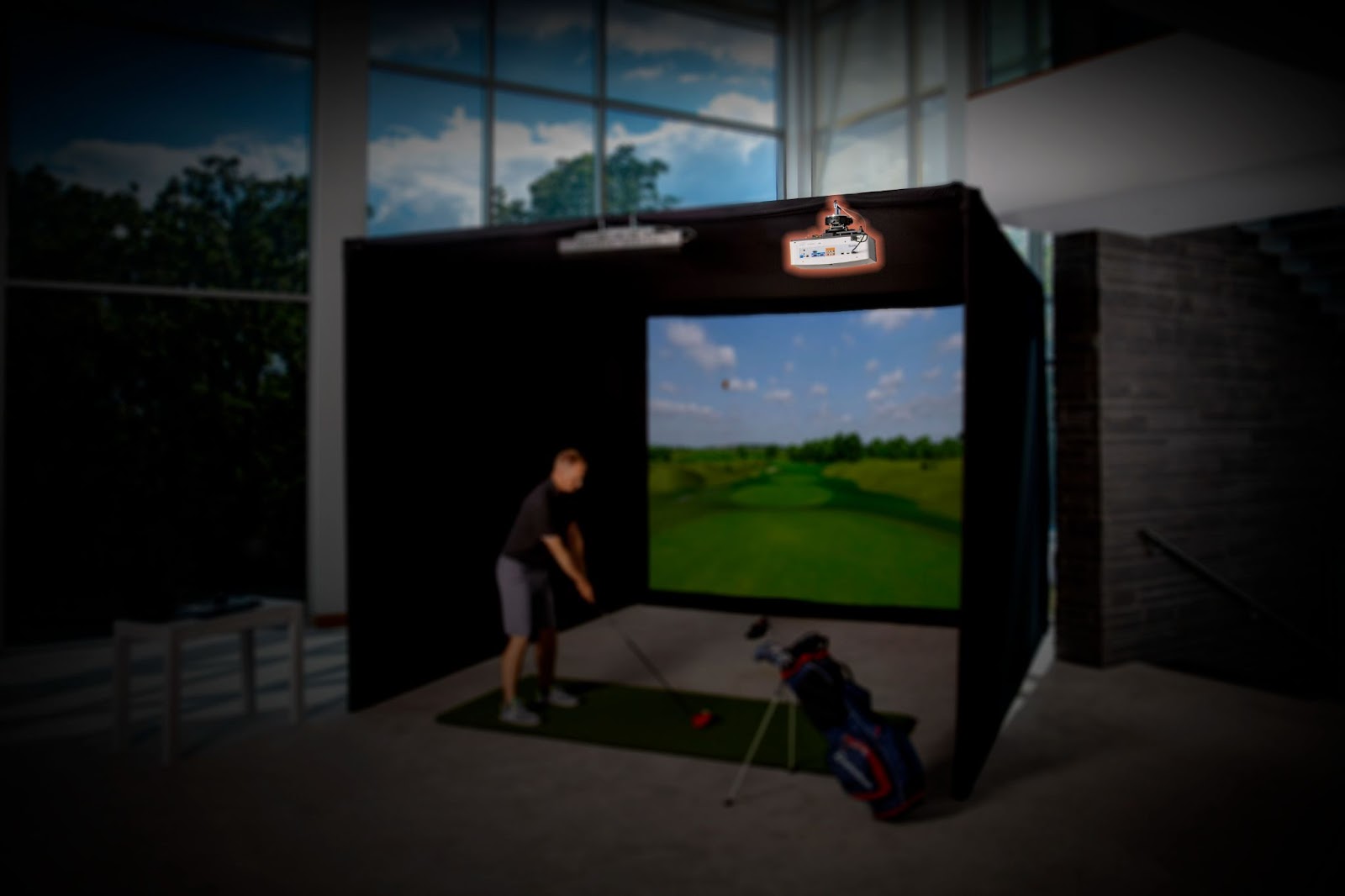 Selecting a projector for your golf simulator can be as hard as choosing a place to eat with your significant other.

Then, once you’ve found that perfect projector, you have to learn the terminology, figure out how to use it, know how to set it up, and find a safe place to mount it. It’s a lot to think about.

Are you lacking that decision-maker in your relationship? We can’t help you there, but we sure can make some useful suggestions on where to safely mount or place your projector.

Below, we will discuss the main options for a safe projector placement and the pros and cons that go with each one.

The biggest benefit of mounting your projector to your ceiling or to the frame of an enclosure, such as the Carl’s Place Pro Enclosure, is that it can be completely out of the way of swinging clubs, flying balls and walking people.

Ideally, a ceiling-mounted projector should be directly behind the golfer and far enough so that the golfer’s backswing and follow-through will not be anywhere near the projector. If you think it is out of the way but it’s still close, that could throw the golfer off mentally and even potentially change their swing.

This means you might have to mount it in a place where the projected image will be coming into the impact screen at an angle. For this, you will want to make sure your projector has the ability to adjust vertical and horizontal keystone and/or adjust the corners of the image to fill your screen nicely.

If the projector is mounted above and behind the golfer, there’s little to no chance of a ball hitting the projector, especially if you have extra safety precautions to eliminate bounceback like these foam inserts for your enclosure frame near the impact screen.

One disadvantage of a ceiling-mounted projector is that it is harder to adjust, move and maintain than a projector on the floor or on a table/cart. Be sure to verify that the projector’s throw distance works with your setup before actually mounting the projector, otherwise you might be just slightly off and need to drill new holes for your mount.

A lot of the same information from a ceiling-mounted projector applies for a frame-mounted unit.

However, a frame-mounted projector is a great option when your ceilings are too high or permanent changes, such as drilling into your ceiling, are not possible. 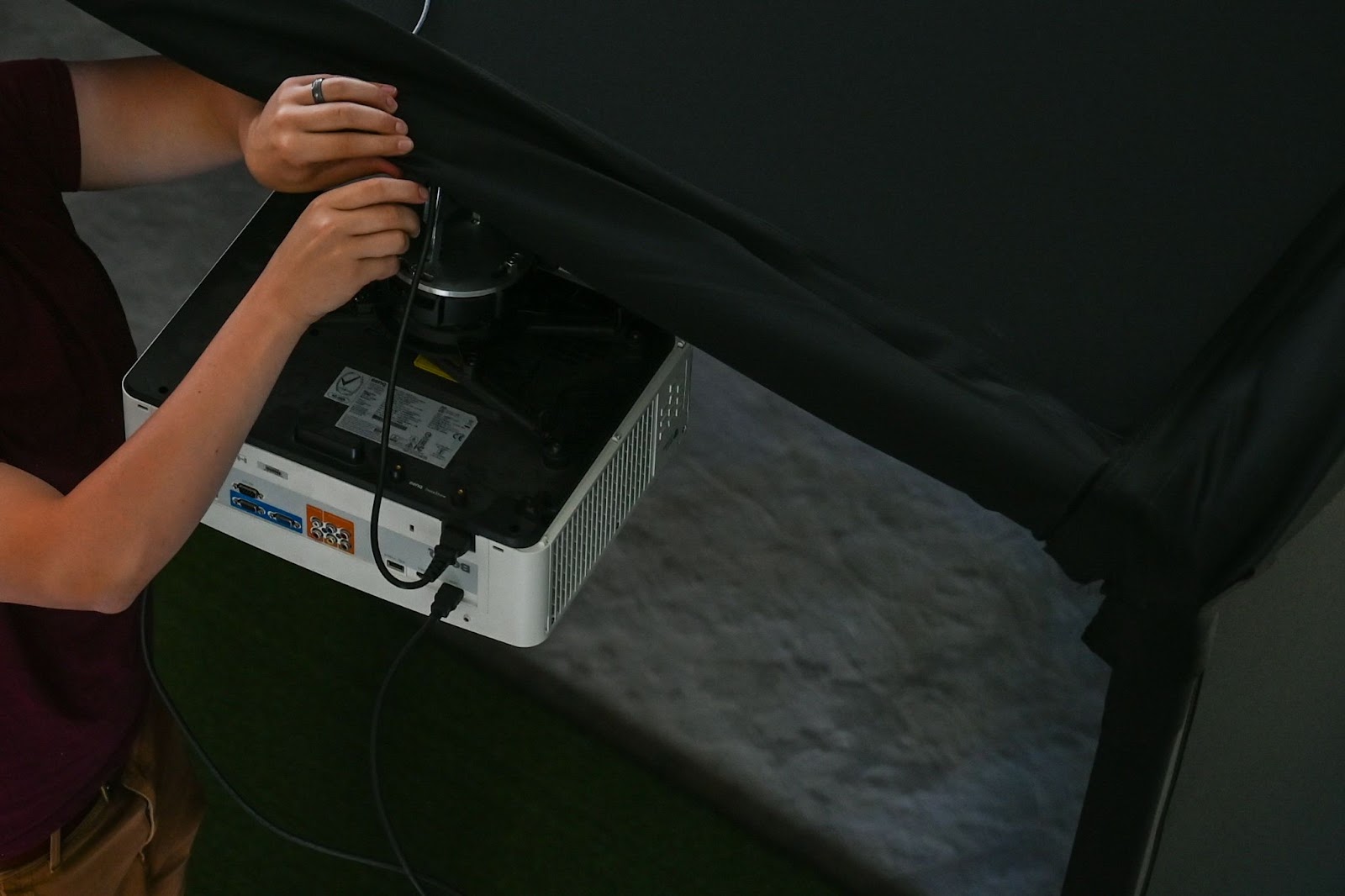 Carl’s Place sells a ceiling mount, drop mount and frame mount for your projector. Here are some resources to help you install and mount your projector in your golf simulator setup:

Floor mounting is a decent idea, but some extra precautions will need to be taken.

In that case, it will likely be in danger of balls off the club or bouncing back off the impact screen, so a floor projector protective case is almost a necessity.

Also, it will slightly be in the way if you need to collect your golf ball(s), but at least it is out of the way of other people walking around your golf simulator enclosure.

Keep in mind that floor mounting in front of a golfer only works with short-throw or ultra short-throw projectors, such as the BenQ TH671ST, LW500ST, TK700STi, or LK936ST.

While placing your projector on a table or a cart is an option, we suggest avoiding it as much as possible.

The first reason is that there is a chance of golfer shadows being on the screen. The second is that the cart or table might be in the way or take up unnecessary space in your set up or on your computer table.

Yes, it is possible to place your projector on a cart or table if you have enough space and it is your only option. We realize there is not a one-size-fits-all solution for projector placement as each golf simulator setup is different.

Don’t put your projector in any danger. Overhead mounting your projector to a golf enclosure is one of the best ways to protect your projector. If you’re questioning its placement at all, we’d suggest finding a new, safer spot. Take that hesitancy out of your brain so it doesn’t affect your golf game, or so your treasured projector doesn’t get ruined.

And do your research before you buy. Double and triple check to avoid as much hassle as possible.

Deciding which projector to buy for your golf simulator setup can be pretty difficult, let alone...

Work on your golf swing. Take a moment to yourself. Create your backyard man cave. All of this is...