How To Make Or Repair A Golf Hitting Mat

Whether you're trying to save your joints from an old golf mat or making a DIY hitting mat, we'll walk you through how to make or repair your golf hitting mat. 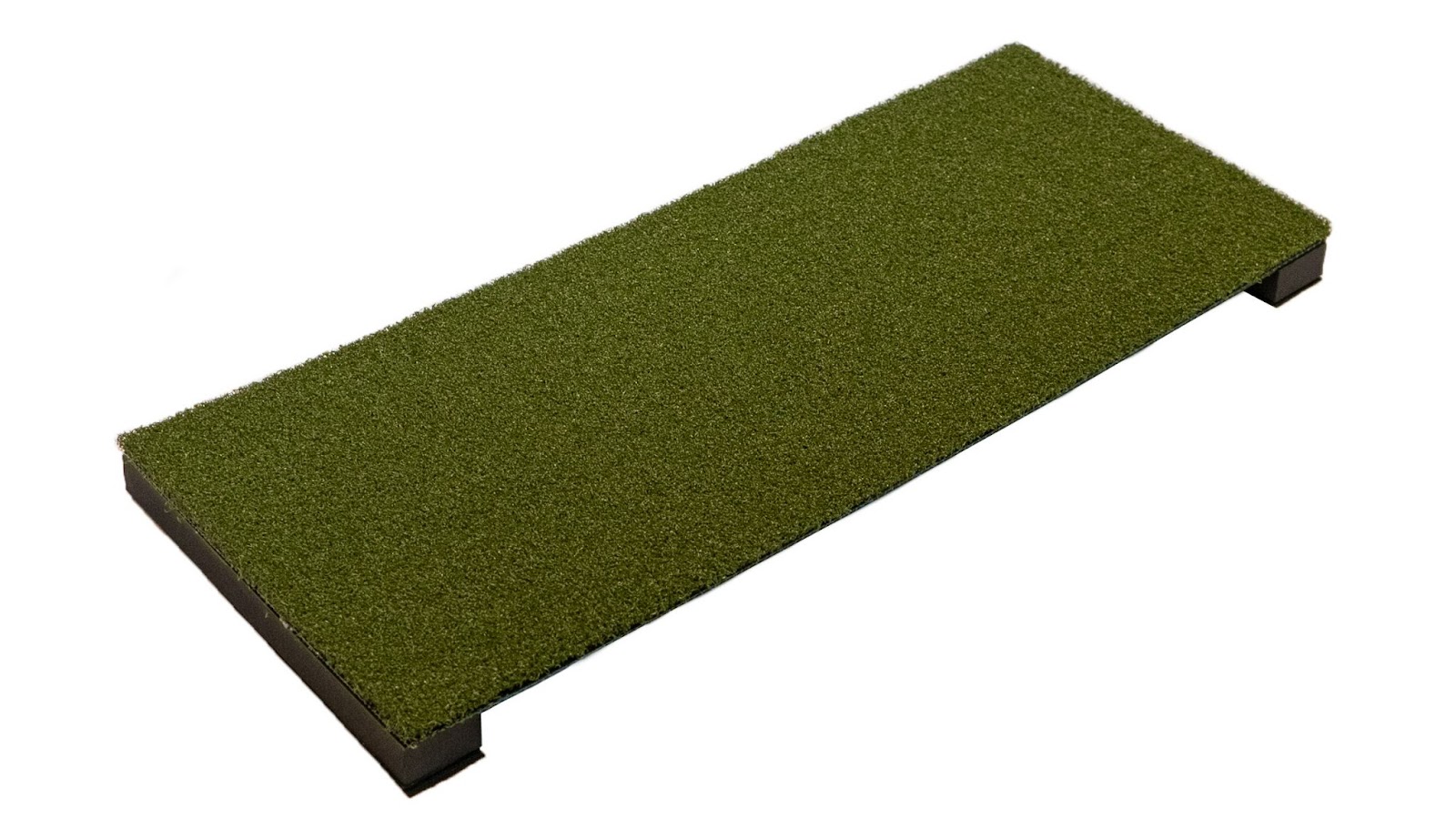 Once you start playing on a golf simulator - kinda like that morning coffee - it’s hard to stay away.

If you just can’t stop playing on your home golf simulator, you might start seeing some wear on your hitting mat over time. Depending on how much ground you sweep (or chunk) during your swing, your hitting mat might wear down faster than others. 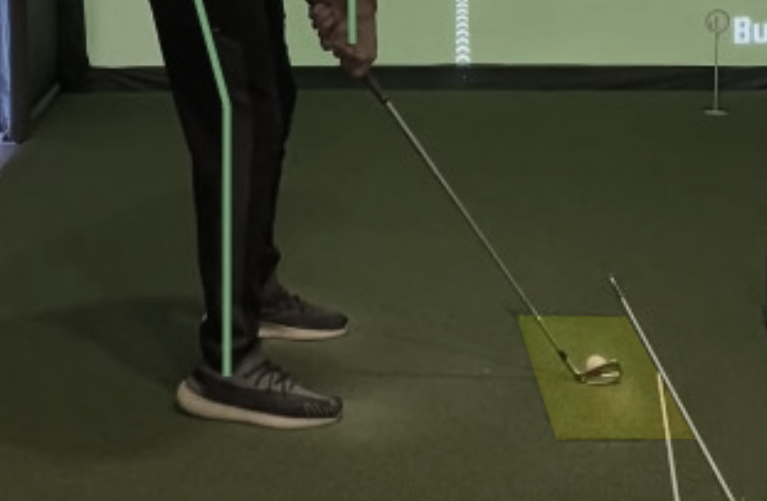 Then the thought hits you: “I’m going to need to buy a whole new hitting mat pretty soon!” Not if Carl’s Place has anything to say about it!

Whether you're trying to save your joints from an old golf mat or making a DIY hitting mat, we'll walk you through how to make or repair your golf hitting mat.

The Carl’s Place Divot Hitting Strip, standing about 1.75 inches tall, is a high quality replacement for most worn out hitting mats. Or, you could just start with the hitting strip; it is softer than your typical hitting mat, which will save your joints from injuries while still providing that realistic golf course feel.

Some golfers might not even originally invest in a hitting mat; instead, they will insert a hitting strip into their golf simulator turf and puzzle gym mats underneath. See the photo above thanks to Carl's Place customer DJ.

No matter the reason, the hitting strip will save your joints from that bouncy shock from some hitting mats, while also providing realistic feedback on chunky shots.

BENEFITS OF A HITTING STRIP

There are many benefits of using a hitting strip, especially for how simple the installation process is.

HOW TO REPAIR A GOLF A HITTING MAT

Let’s get this out there right away: a hitting strip by itself is not going to be ideal. Nobody likes to hit a golf ball when it's above or below your feet, so you won’t want to set it up that way in your simulator.

Whether you’re wanting to install the hitting strip into your hitting mat or into your turf and gym mat flooring, you’ll want to measure or trace the area you will be cutting out. In our upcoming example photos, we were installing a hitting strip into a Carl’s Place 4'x9' Hitting Mat.

You’ll need to visualize the placement upside down now. Make sure the hitting mat goes the long way across your golf simulator space. And the divot strip goes perpendicular to the screen, in line with your swing. 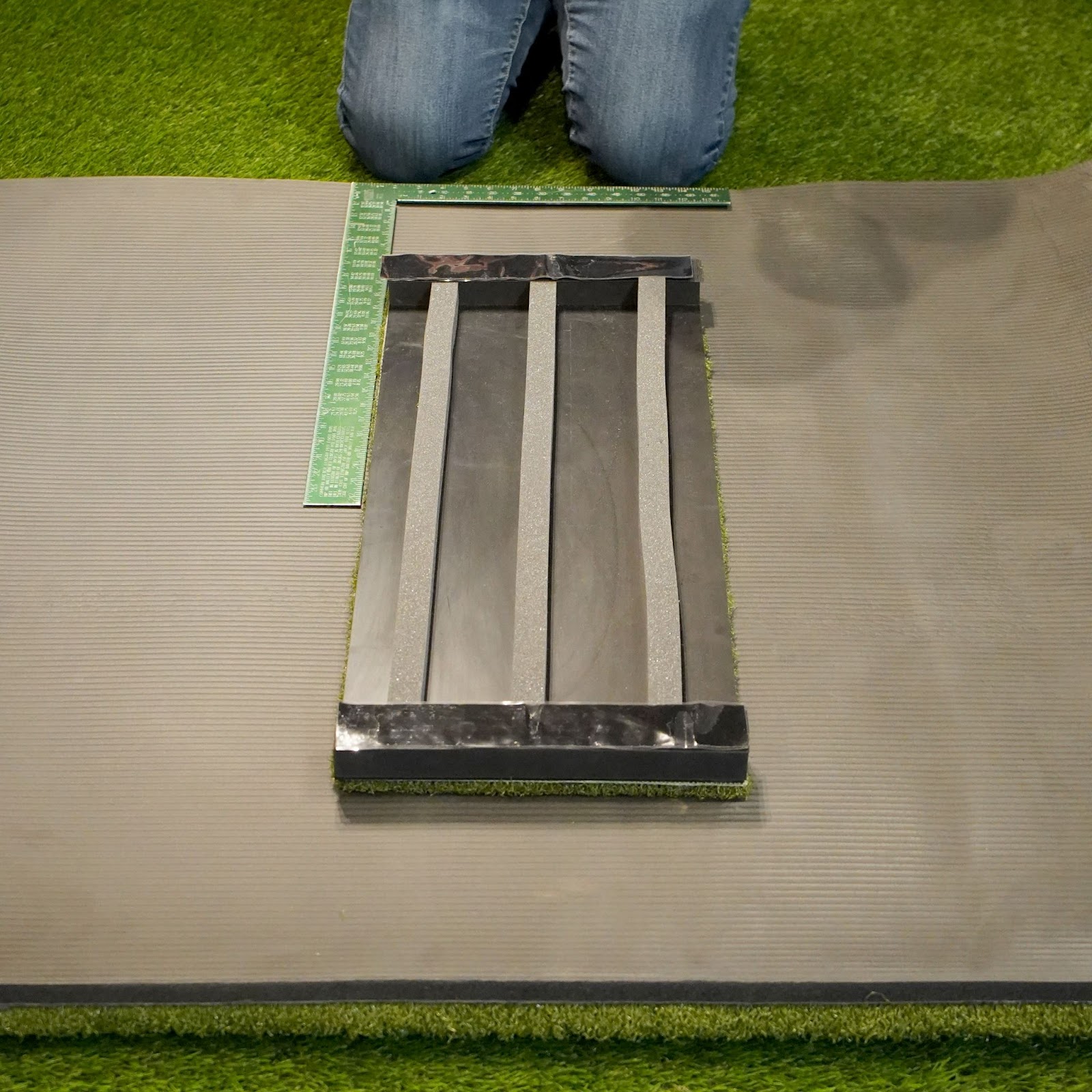 Then we marked the four corners with a sharpie. 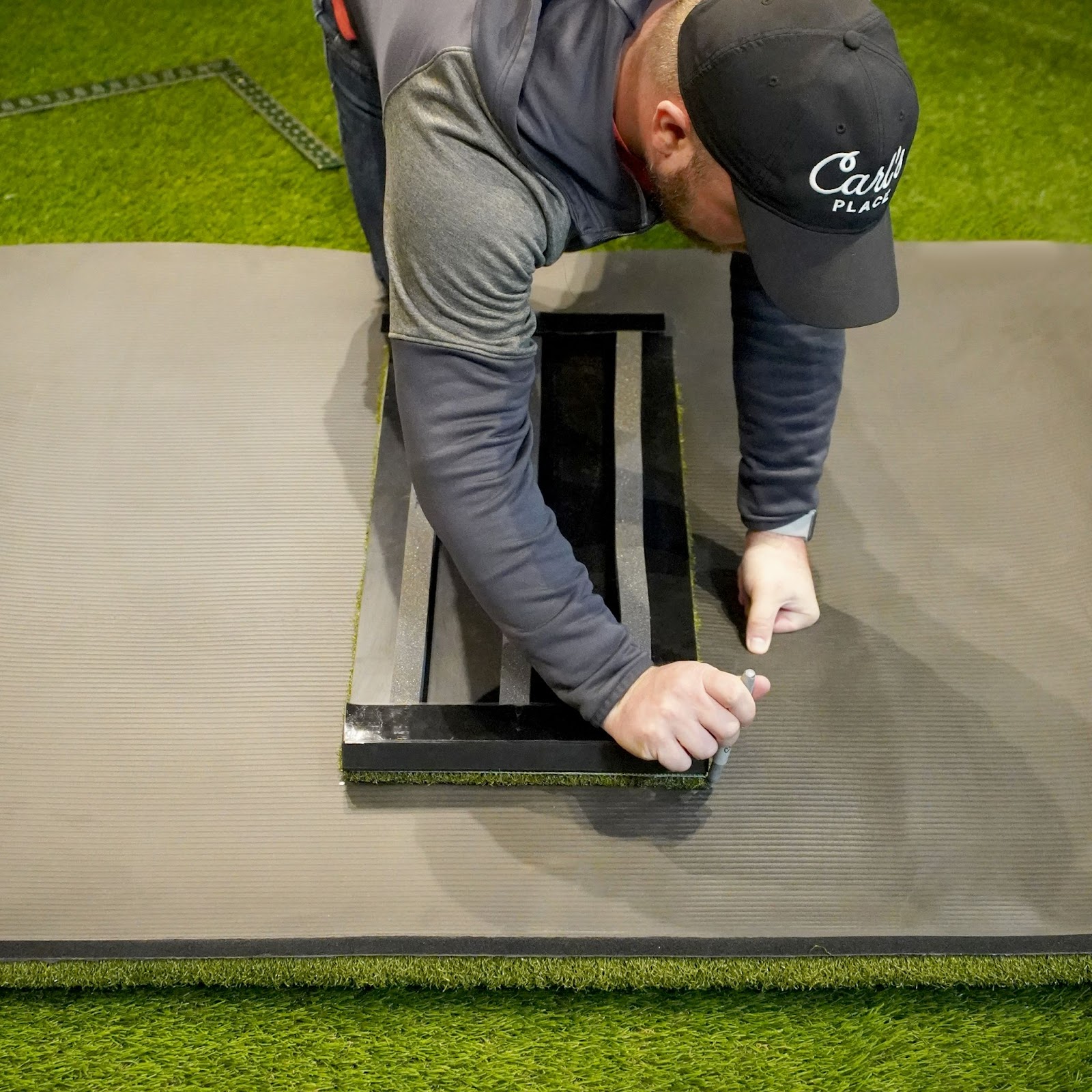 We connected the corners with a straightedge to make sure the lines were nearly perfect. 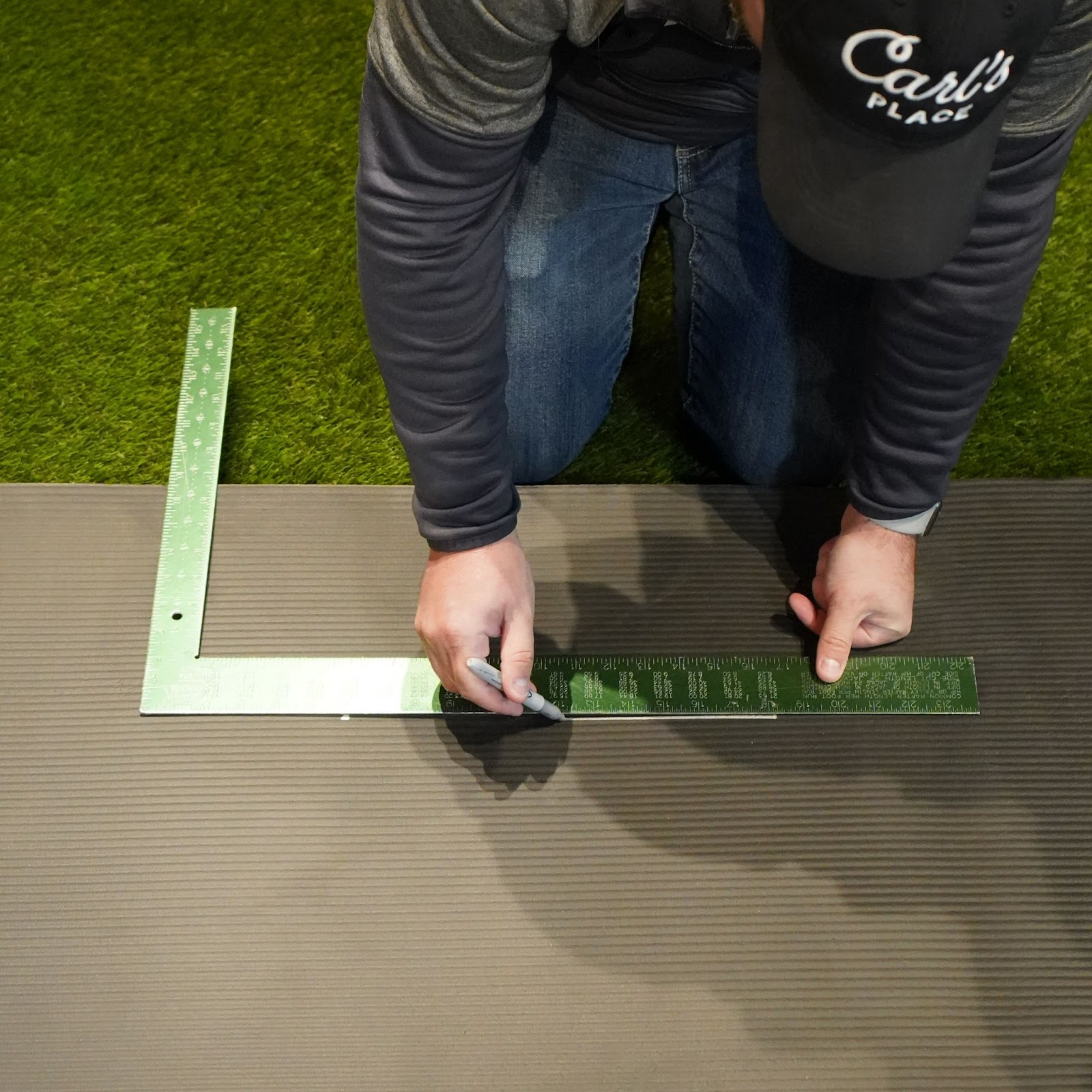 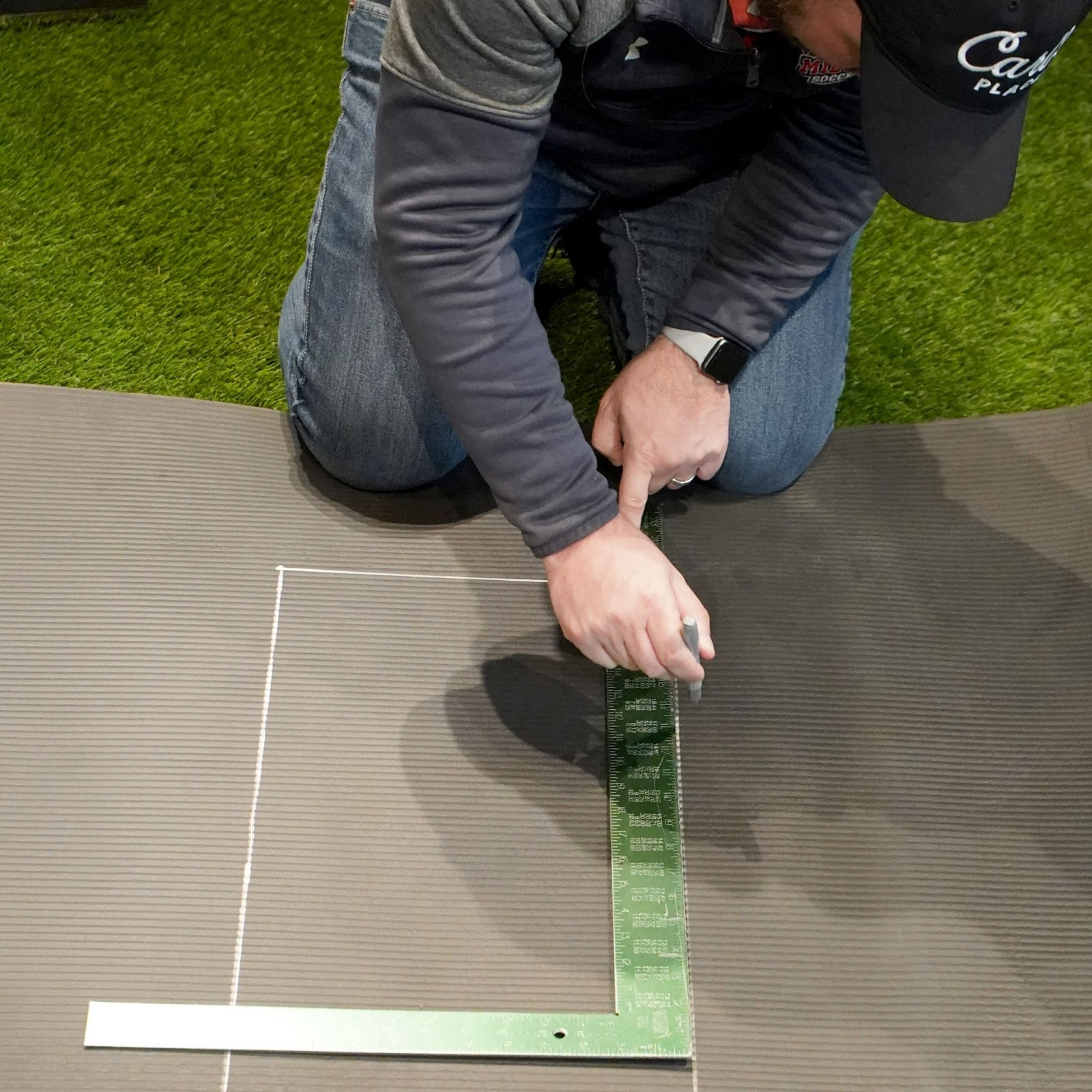 If you want to go the measuring route, the hitting strip is 12 inches wide by 30 inches long. Just be sure that your corners are perfect right angles!

CUT OUT THE WORN HITTING AREA

Once you have your spot measured and/or traced out, you can start cutting. We suggest starting to cut on the inner part of the line to make sure the hitting strip stays nice and snug when inserted into the mat. It will be easier to cut more off than it would be to add more substance back in to tighten it up.

However, you do not want it to be too snug as that will not allow it to bend downward when the club strikes it.

But, if you cut it to fit snugly, it will be easier to squish the turf and bottom foam to make room for the hitting strip.

To cut the bottom foam of the hitting mat, we used a box utility knife. 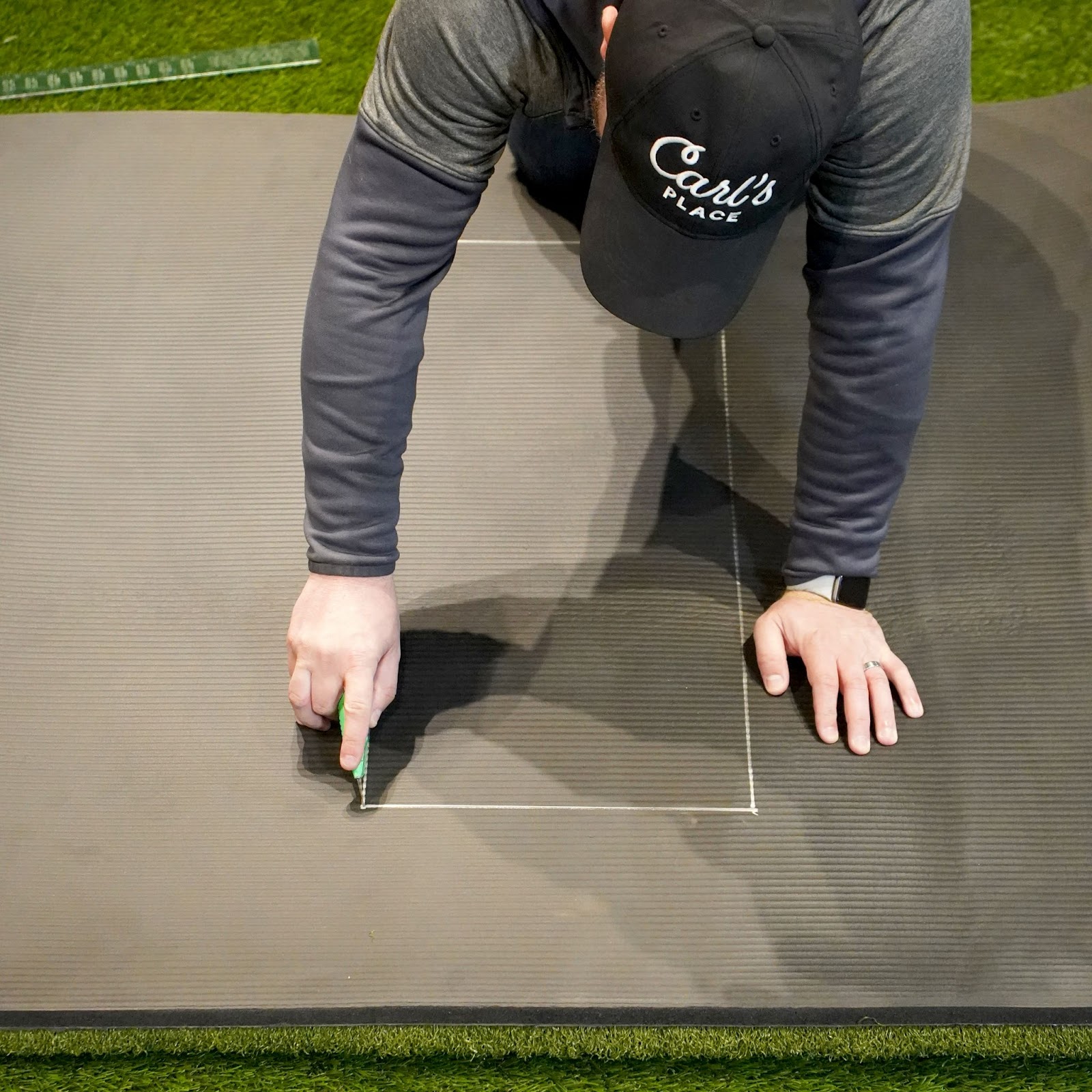 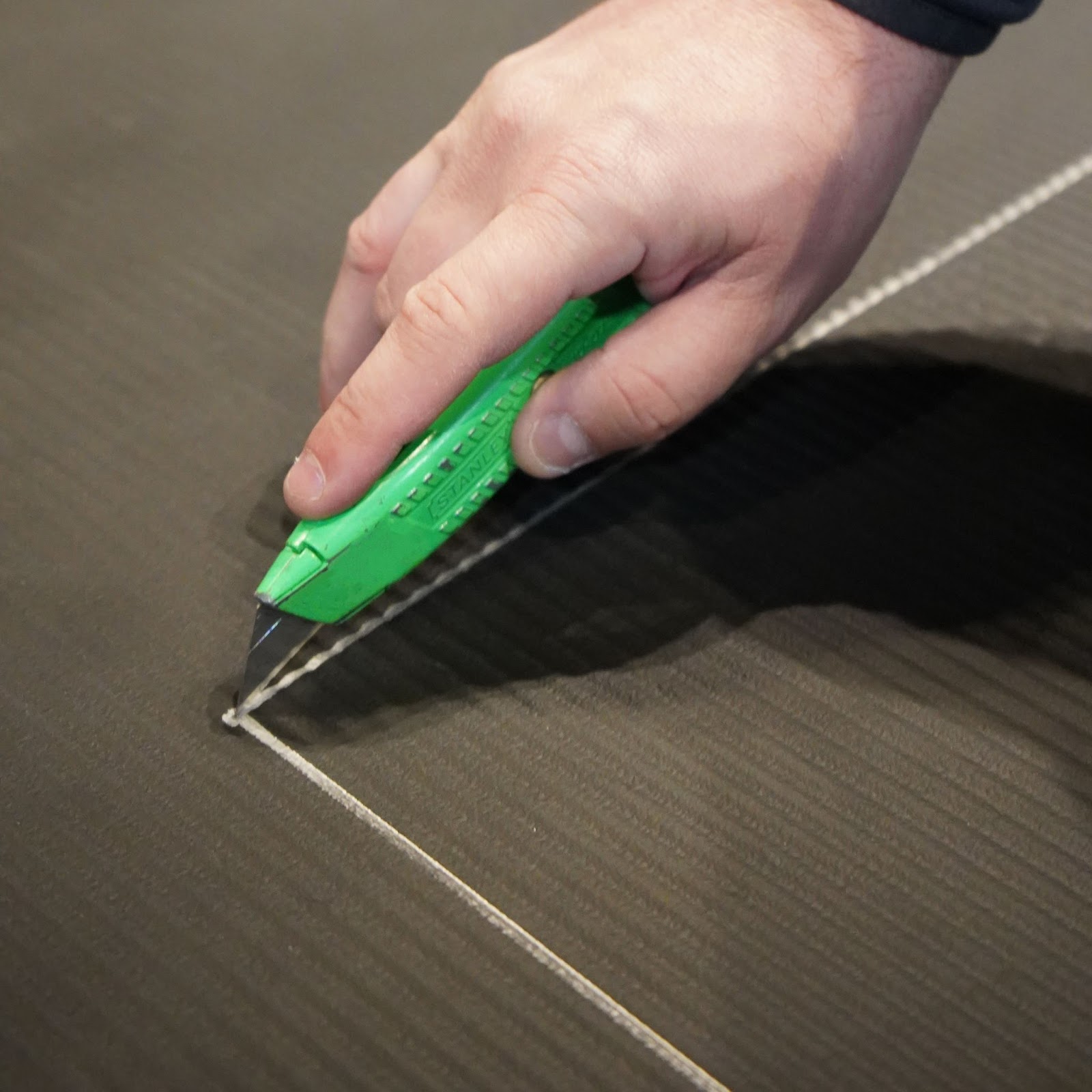 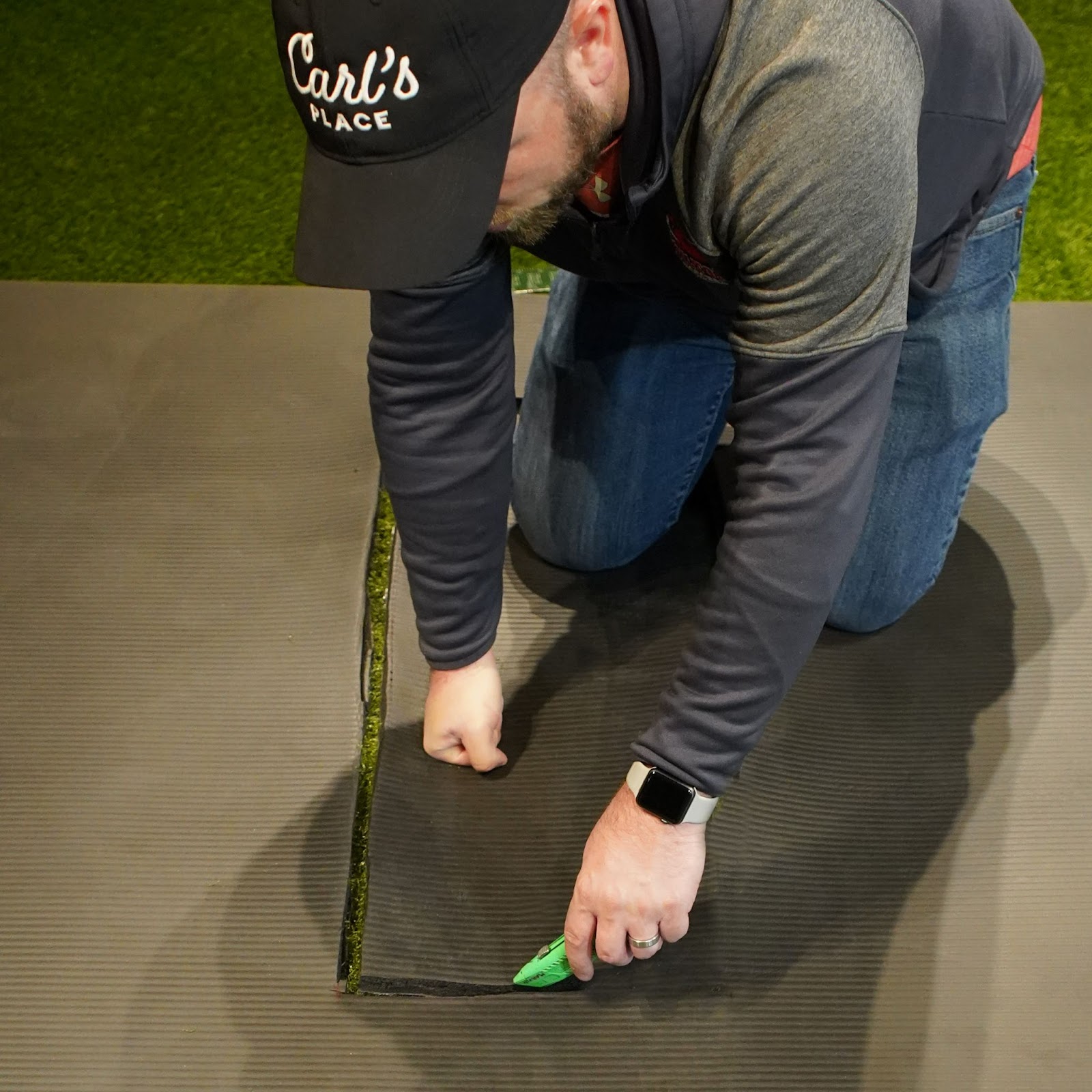 Once you have the hitting mat piece cut out, flip over your hitting mat and start stuffing the hitting strip in. Don’t forget to take off the adhesive strip so that the strip sticks to your surface below (if that is your preference).

If the hole in your hitting mat or turf is snug enough, you might not need to use the adhesive strip as the hitting mat would hold it tight enough and not allow it to move around or come out. 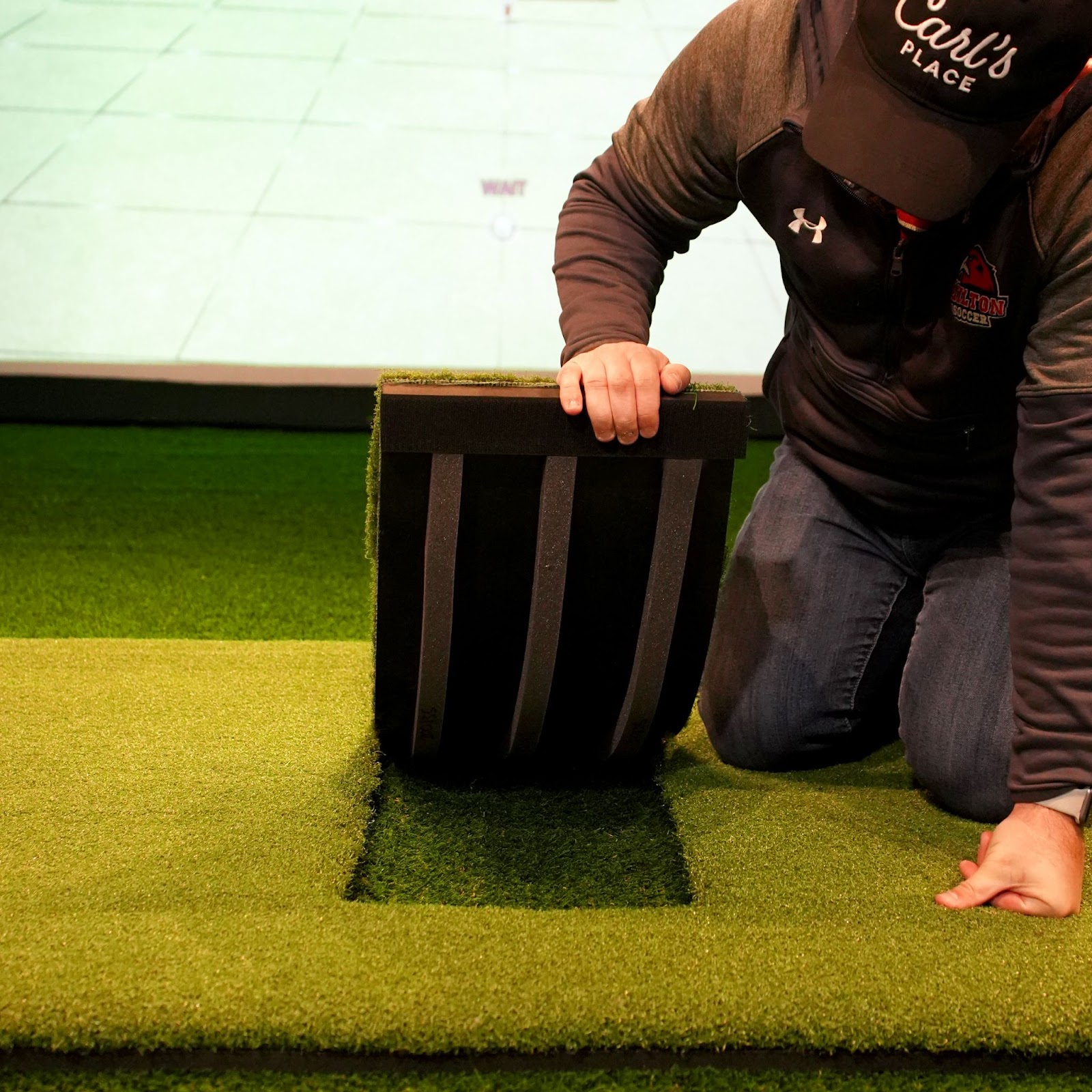 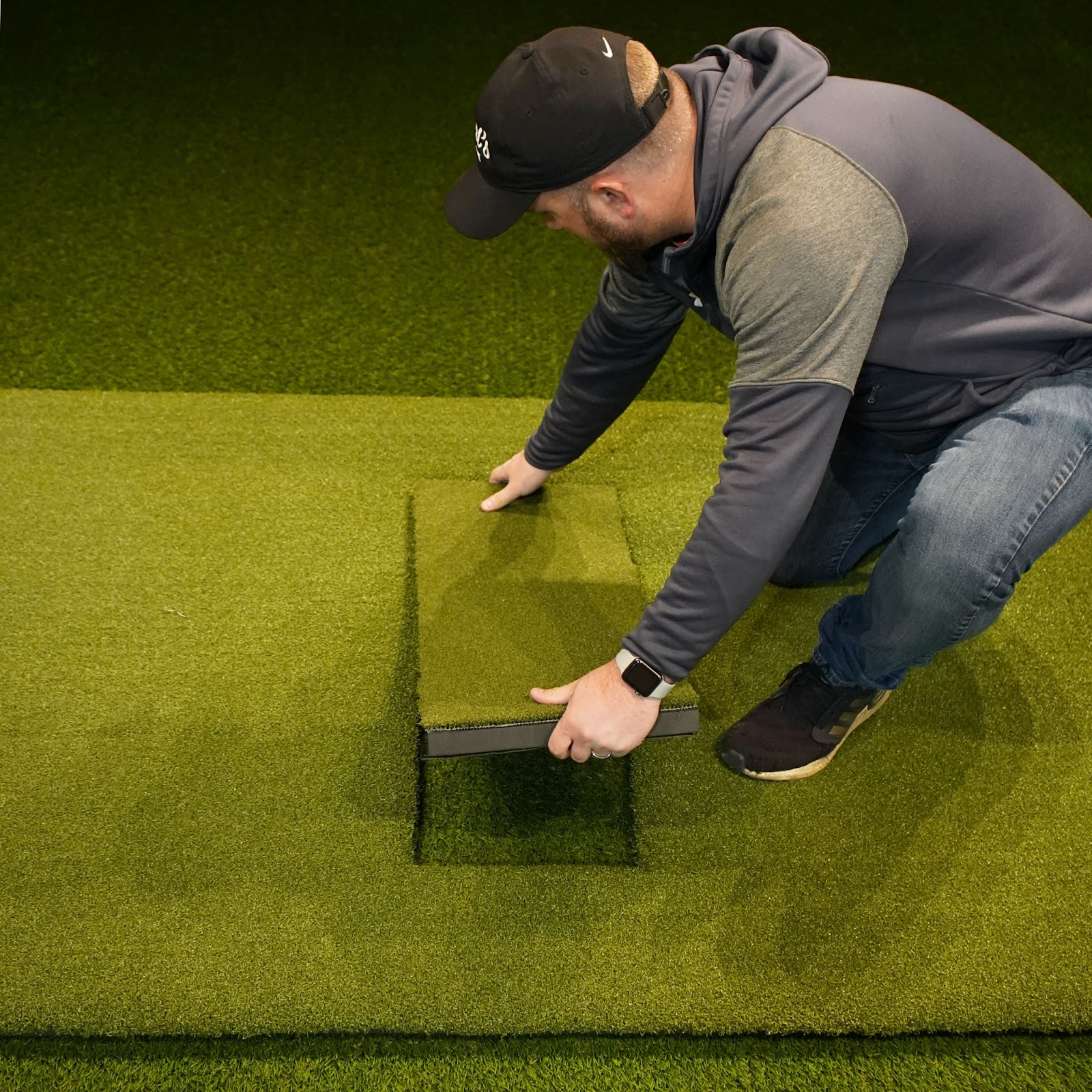 Once the hitting strip is securely placed and looks how you imagined, it’s time to start playing again! 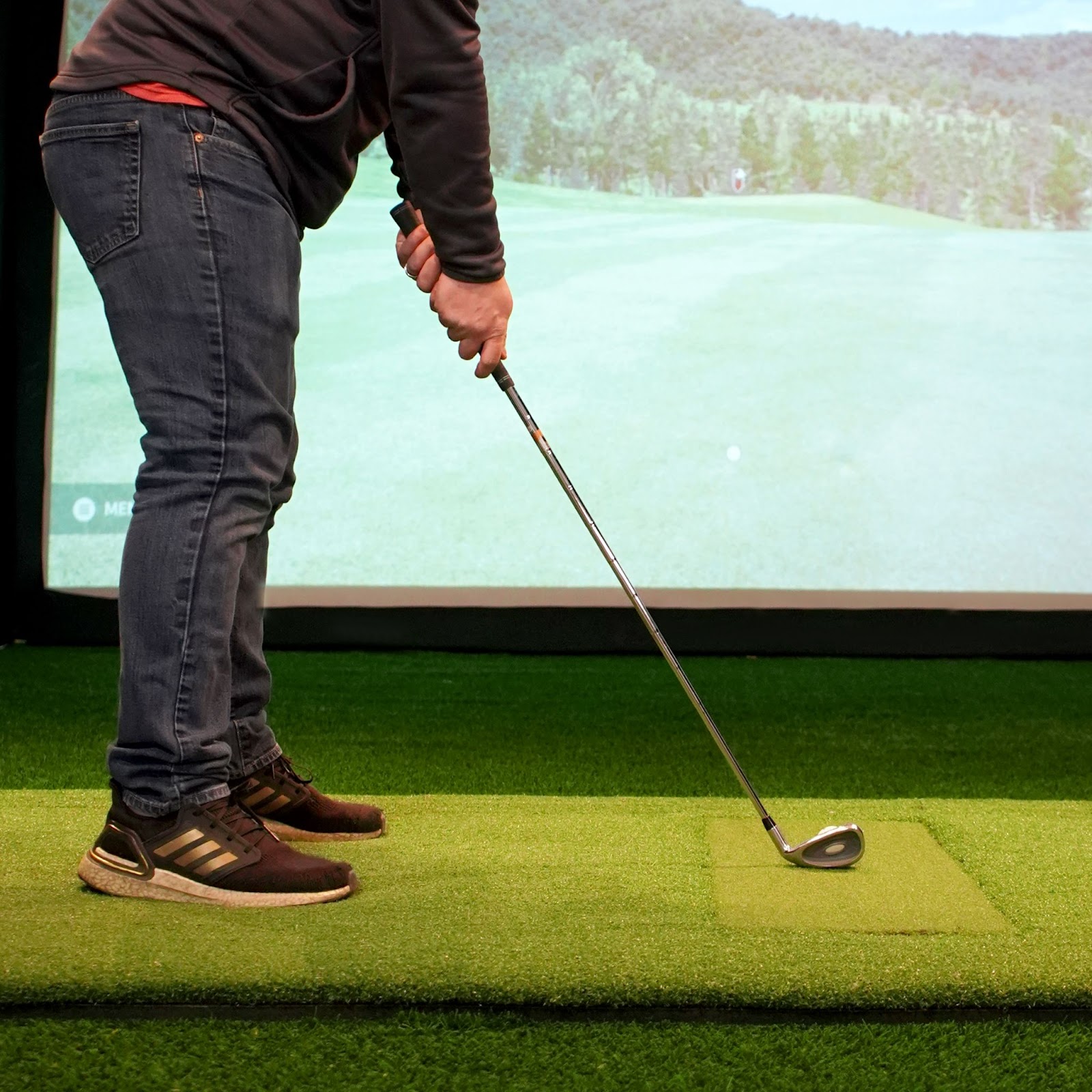 Did you know? Our hitting strip can be used with more than just the Carl’s Place hitting mat; try it with a Country Club Elite Hitting Mat or Fiberbuilt mat, or let us know in the comments what other mats you would use it with!

Most affordable. Most durable. Or most realistic. Make sure to do your research on which golf... 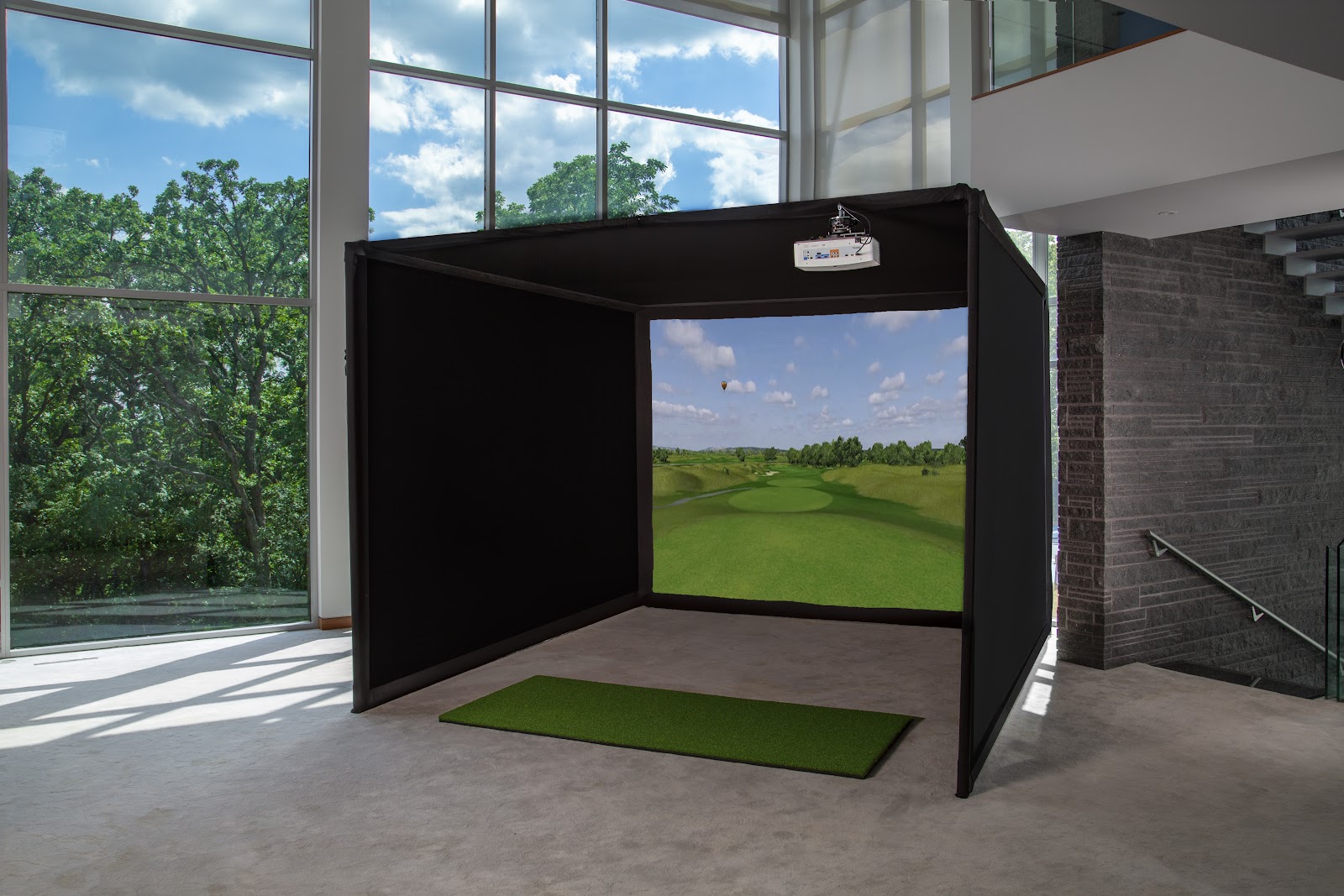 Golf Hitting Mat: How To Choose

A golf hitting mat is a necessary aspect of a golf simulator setup, but how do you know which one... 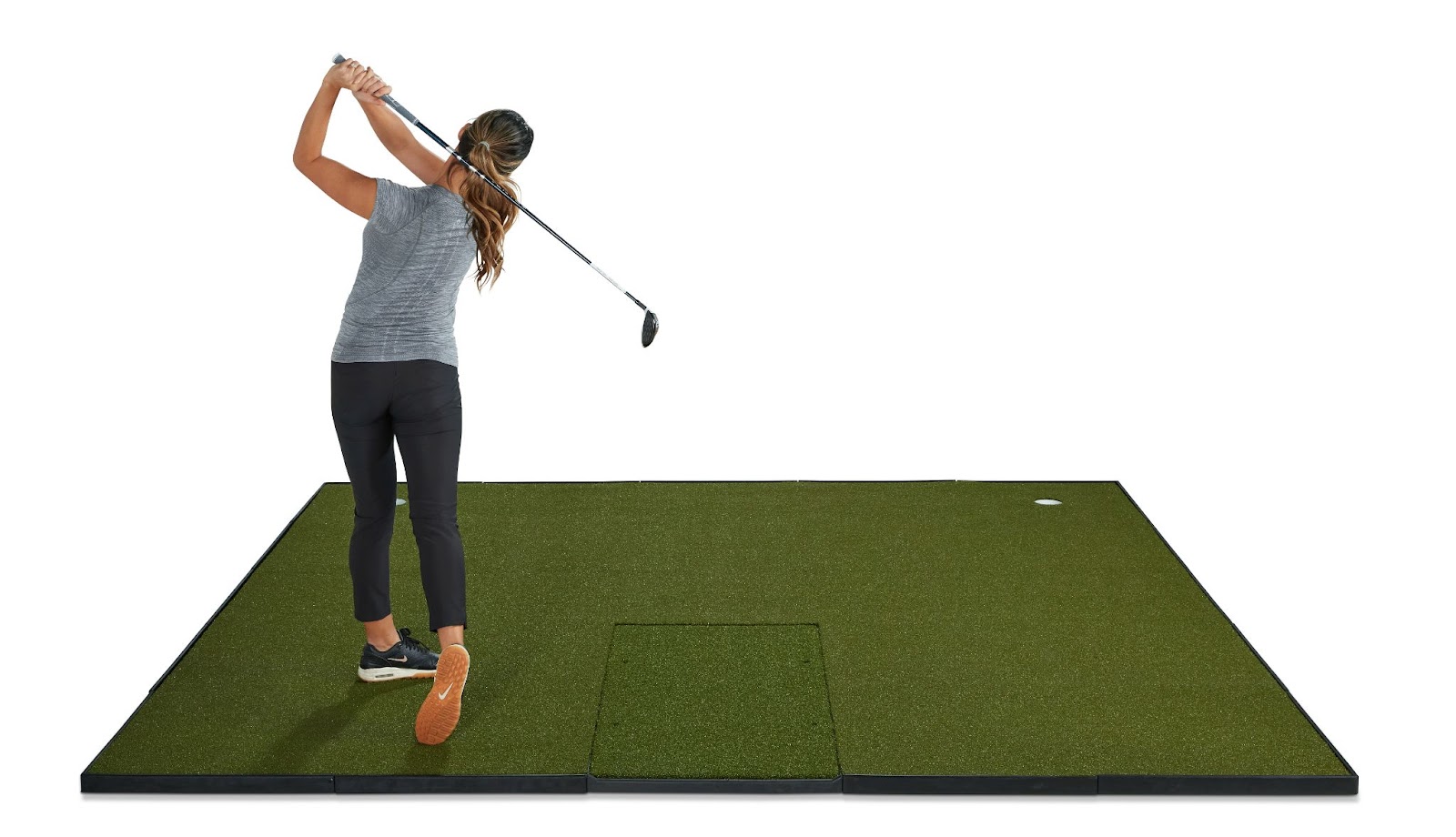 Which Fiberbuilt golf mat is right for you?

No matter what your indoor golfing situation is, you can likely find a Fiberbuilt mat that can...